I’m enrolled on the Learning Analytics and Knowledge (LAK13) which is an open online course introducing data and analytics in learning. As part of my personal assignment I thought it would be useful to share some of the data collection and analysis techniques I use for similar courses and take the opportunity to extend some of these. I should warn you that some of these posts will include very technical information. Please don’t run away as more often than not I’ll leave you with a spreadsheet where you fill in a cell and the rest is done for you. To begin with let’s start with Twitter.

Like other courses LAK is using a course tag hashtag to allow aggregation of tweets, in this case #lak13. Participants can either watch the Twitter Search for #lak13, or depending on their Twitter application of choice, view the stream there. Until recently a common complaint of the Twitter search is it was limited to the last 7 days (Twitter are now rolling out search for a small percentage of older tweets). Whilst this limit is perhaps less of an issue given the velocity of the Twitter stream for course tutors and students having longitudinal data can be useful. Fortunately the Twitter API (API is a way for machines to talk to each other) gives developers a way to use Twitter’s data and use it in their applications. Twitter’s API is in transition from version 1 to 1.1, version 1 being switched off this March, which is making things interesting. The biggest impact for the part of the API handling search results is the:

This means you’ll soon no longer to be able to create a Twitter search which you can watch in an RSS Feed Aggregator like Google Reader like this one for #lak13.

All is not lost as the new version of the API still allows access to search results but only as JSON.

I don’t want to get to bogged down in JSON but basically it provides a structured way of sharing data and many websites and web services will have lots of JSON data being passed to your browser and rendered nicely for you to view. Let’s for example take a single tweet:

Whilst the tweet looks like it just has some text, links and a profile image underneath the surface there is so much more data. To give you an idea highlighted are 11 lines from 130 lines of metadata associated with a single tweet. Here is the raw data for you to explore for yourself. In it you’ll see information about the user including location and friend/follower counts; a breakdown of entities like other people mentioned and links; and ids for the tweet and in reply to. 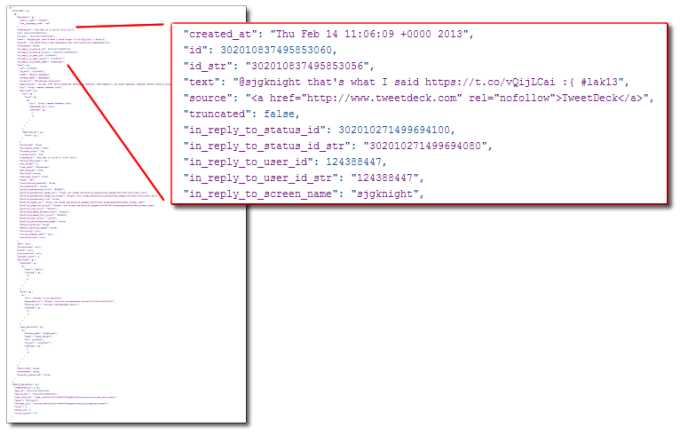 So there is potentially some rich data contained in tweets, but how can we capture this for analysis? There are a number of paid for services like eventifier that allow you to specify a hashtag for archive/analysis. As well as not being free the raw data isn’t also always available. My solution has been to develop a Google Spreadsheet to archive searches from Twitter (TAGS). This is just one of many other solutions like pulling data directly using R and Tableau the main advantage with this solution for me is I can set it up and it’s happy to automatically collect new data.

Setting this up to capture search results from #lak13 gives use the data in a spreadsheet.

This makes it easy to get overviews of the data using the built-in templates: 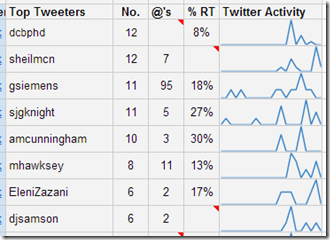 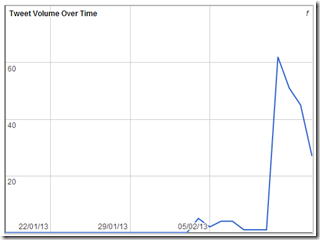 … or, as I’d like to spend the rest of this post, quickly looking at ways to create different views.

As you will no doubt discover using a spreadsheet environment to do this has pros and cons. On the plus side it’s easy to use built-in charts and formula to analyse the data, identifying queries that might be useful for further analysis. The downside is you are limited in the level of complexity. For example, trying to do things like term extraction, n-grams etc is probably not going to work. All is not lost as Google Sheets makes it easy to extract and consume the data in other applications like R, Datameer and others.

I’ve got a post on Feeding Google Spreadsheets: Exercises in using importHTML, importFeed, importXML, importRange and importData if you want to learn about other import options, but for now we are going to use importRange to pull data from one spreadsheet into another.

If you open this spreadsheet and File > Make a copy it’ll give you a version that you can edit. In cell A1 of the Archive sheet you should see the following formula =importRange(“0AqGkLMU9sHmLdEZJRXFiNjdUTDJqRkNhLUxtZE5FZmc”,”Archive!A:K”)

What this does is pull the first couple of columns from this sheet where I’m already collecting LAK13 tweets (Note this techniques doesn’t scale well, so when LAK starts hitting thousands of tweets you are better doing manipulations in the source spreadsheet than using importRange. I’m doing it this way to get you started and try some things out).

On the Summary sheet I’ve extended the summary available in TAGS by including weekly breakdowns. The entire sheet is made with a handful of different formula used in slightly different ways with a dusting of conditional formatting. I’ve highlighted a couple of these:

To give you some examples of possible queries you can use with data from Twitter in the spreadsheet you copied is a Query sheet with some examples. Included are some sample queries to filter tweets with ‘?’, which might indicate questions (even if rhetorical), time based filters and counts of messages between users.

Tony Hirst has written more about Using Google Spreadsheets as a Database with the Google Visualisation API Query Language, which includes creating queries to export data.

Other views of the data

The ability to export the data in this way opens up some other opportunities. Below is a screenshot of a ego/conversation centric view of #lak13 tweets rendered using the D3 javascript library. Whilst this view onto the archive is experimental hopefully it illustrates some of the opportunities.

Hopefully this post has highlighted some of the limitations of Twitter search, but also how data can be collected and the opportunities to rapidly prototype some basic queries. I’m conscious that I have provided any answers about how this can be used within learning analytics beyond the surface activity monitoring but I’m going to let you work that one out. If you want so see some of my work in this area you might want to check out the following posts: