Graphs can be a powerful way to represent relationships between data, but they are also a very abstract concept, which means that they run the danger of meaning something only to the creator of the graph. Often, simply showing the structure of the data says very little about what it actually means, even though it’s a perfectly accurate means of representing the data. Everything looks like a graph, but almost nothing should ever be drawn as one. Ben Fry in ‘Visualizing Data’ 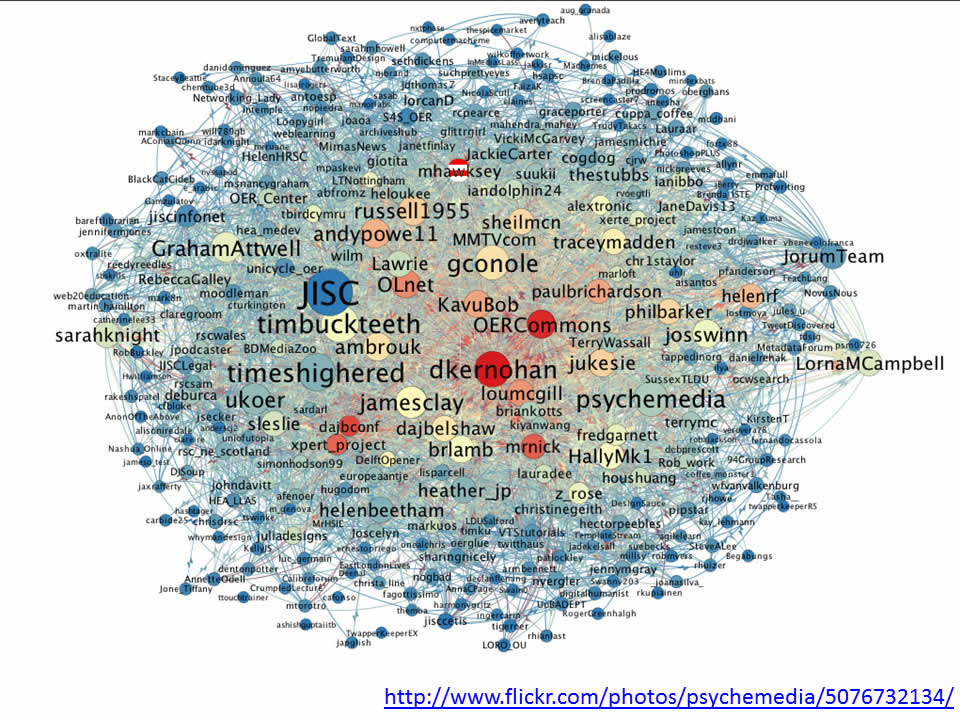 I got that quote from Dan Brickley’s post Linked Literature, Linked TV – Everything Looks like a Graph and like Dan I think Ben Fry has it spot on. When I started following Tony’s work on network analysis (here’s a starting point of posts), my immediate response was ‘Where’s Wally?’, where was I in relationship to my peers, who was I connected to, or even who wasn’t I connected to.

As I start my exploration of tools like NodeXL it’s very clear that being able to filter, probe and wander through the data provides far more insights to what’s going on. This is why when I, and I’m sure Tony as well, show our tangled webs it’s designed as a teaser to inspire you to follow our recipes and get stuck into the data yourself. This isn’t however always practical. 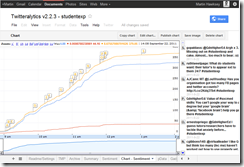 A recent example of this was when I was looking through the Guardian’s Using social media to enhance student experience seminar #studentexp. I’d captured the #studentexp tagged tweets using my TAGS spreadsheet, used my recipe get sentiment analysis from ViralHeat and imported the data into NodeXL to start exploring some of the tweets and conversations from the day.

But what does this graph actually mean? I could start highlighting parts of the story, but that would be my interpretation of the data. I could give you the NodeXL file to download and look at, but you might not have this software installed or be proficient at using it. I could try looking at the raw data in the Google Spreadsheet, but it lacks ‘scanability’. So I’ve come up with a halfway house. A re-useable interface to the TAGS spreadsheet which starts presenting some of the visual story, with interactivity to let you drilldown into the data. I give you:

TAGSExplorer is a result of a couple of days code bashing (so a little rough around the edges) which mainly uses the johman’s Twitter Smash example) I’ve been able to reformat the raw Twitter data from the Google Spreadsheet and reformat it returning Twitter functionality like reply/retweet by using their Web Intents API.

How to make your own?

If you don’t have your own data yet here’s some examples from data I’ve already collected:

I’ve got some ideas, I’m interested in integrating the sentiment scores from ViralHeat, but more importantly where do you think I should go next with this?

Previous Post: A template for rendering small NodeXL visualisations on the web using the d3.js
Next Post: What I’ve starred this month: October 28, 2011