Having experimented with the Twitter API for a couple of years I’m familiar with a number of the limitations, particularly when it comes to the Twitter Search API. The biggest being the maximum number of tweets (1,500) and timeframe (last 7 days) you can extract in one go. This means that whilst tools like NodeXL’s* the built-in import Twitter searches are convenient to grab network data for small and sort events you need to find an alternative data source for larger or extended timeframes.

In this post I highlight how you can use Google Spreadsheets to feed social network analysis tools like NodeXL and Gephi with larger conversation data sets. I’ll be working through this in NodeXL, but the core part of getting the edges data into a .csv format is applicable to other tools like Gephi.

There are a number of tools/services you can use to grab tweets over an extended time. You can install your own server based solutions like ThinkUp or the JISC funded YourTwapperKeeper, use desktop based tools like Archivist Desktop Version or even buy twitter data from datasift.

My solution is to use a Google Spreadsheet I’ve written, which sits in the cloud quietly consuming Twitter search terms. Here’s an example of a copy of that spreadsheet used to collect almost 8,000 tweets from ALT-C 2011 between the 31st August and 19th September. Using a Google Spreadsheet means a lot of the work has already been done for us. Items like who the made the tweet, what they said and when are all in separate cells and ready to be formatted into edge data, but some work is required as follows:

Formatting the data for import

Update 12/04/2016: A better way of doing this is using Google Sheets REGEXEXTRACT formula. For an example and more information for an alternative methods see this forum post https://tags.hawksey.info/forums/topic/export-to-node-xl/#post-701

For vertex 2 we need to extract if the tweet is a reply to another user and there are a couple of issues to be aware of.

So to extract an @reply we have to extract this from the tweet. Here’s how:

You can now export this sheet as a .csv by File > Download as > CSV (Current Sheet)

Formatting the data in NodeXL and making it useful

You’re now free to analysis the data in any way you want.

Some more NodeXL tricks I use

After calculating the in/out degree I added 3 more Other columns to the Vertices called Tweets, Replies and Tooltip Build.

Some basic auto-filling later and here’s a graph of the #altc2011 twitter conversation (I need to do a follow-up post to look at this data in more detail ;): 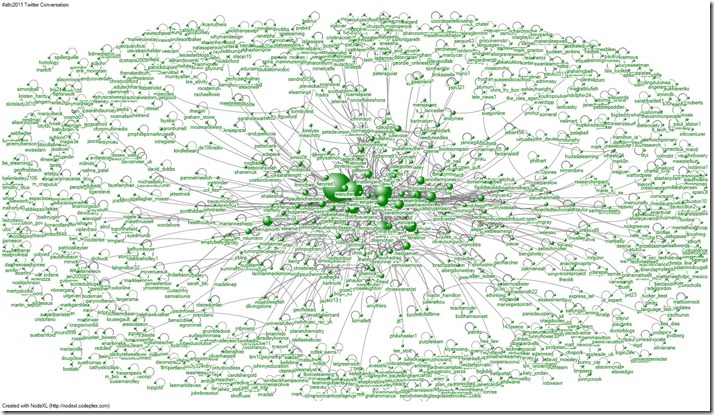 So to briefly recap we took our big chunk of data which was already in a spreadsheet for us, chucked a couple of formula at it and got a network diagram with 7987 tweets in it … simples (he says having spent an *entire day* iterating this solution to this point so please share or comment to make it seem worthwhile ;)

Update: Here’s a copy of the NodeXL .xlsx file for the ALT-C 2011 data if you want to play (you’ll need NodeXL installed)