Last week I posted a method for combining twitter and Yahoo Pipes to allow electronic voting (EVS) style interaction within lectures, TwEVS [see Twitter + voting/polling + Yahoo Pipes = TwEVS (The Making Of)]. At the time I was only interested in documenting the development of this ‘mashup’ but felt a follow up post would be useful to highlight: how to use TwEVS; advantages of using twitter for student response; and areas for future development / discussion.

How to use TwEVS

Before using TwEVS there is some preparatory work in terms of getting students to register an account with twitter and possibly establishing some house rules (usage policy, appropriate use). You should also have an idea of the questions you would like to ask, which may sound simple but to fully engage and enhance learning isn’t (the most common mistake I see is setting trivial questions, which are suitable while you find your feet, but if continued will the students cue to disengage).

Another thing to consider is the format of the hashtags you want to use. Hashtags are a simple way to add metadata to a variety of information making it easier to search and filter. TwEVS requires a unique hashtag for each question you ask so if you are planning to uses this over a semester your might use a combination of an abbreviated course code and date (e.g. #code–year–weekNumber = #CS101-09-wk1)

Pedagogically and technically there are a number of ways you can integrate TwEVS. For more on the pedagogy visit Steve Draper’s ILIG site. My suggestion for technical integration would be to have a slide with the question/options and instructions on how to respond e.g. tweet ‘#CS101-09-wk1 A’ etc. After students had time to respond you could then either open the TwEVS Pipe in a browser, enter the hashtag where prompted then click ‘Run Pipe’ (you can also limit the number of response options, which might help filter out malicious tweets or mistypes). Clicking the ‘TwEVS Result for …’ link opens the graph. If you wanted to streamline this a little you can use the free LiveWeb PowerPoint plugin which allows you to embed live webpages.

Alternativly you could prepare a custom link for each question within your PowerPoint (like this example). As Yahoo Pipes uses information in the url these could be created beforehand.

Below is an example url for the poll #twevspoll limited to 2 responses:

[Edit: Tony Hirst has pointed out that this url can also be written as http://pipes.yahoo.com/mashe/twevs?&_render=rss&limit=2&q=%23twevspoll&vm=r]

[Another Edit: if yo are wondering why the links above don’t return graphs it is because the twitter search by default only pulls tweets from the last 10 days]

The first part of this url will always remain the same allowing you to change the range of response by adjusting the limit (e.g. to limit to 5 would be limit=5) and the hashtag for each question, by changing the text after ‘q=’ (the ‘#’ is replaced by the more url friendly ‘%23’). 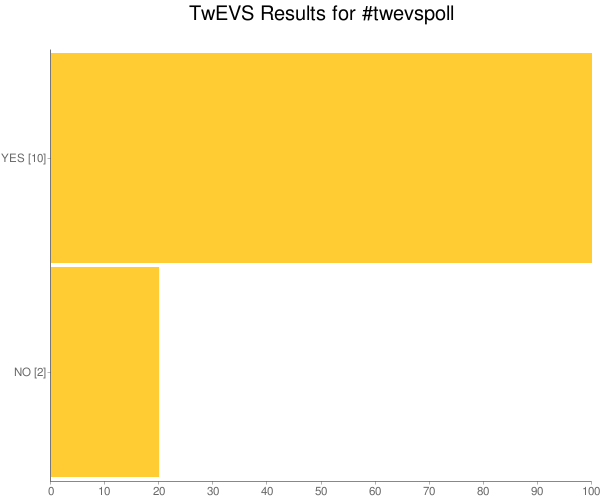 Its worth noting that Yahoo stores a copy of each pipe run so when a pipe is run again before an allotted amount of time has passed it just pulls results from memory and doesn’t necessarily check twitter for the latest tweets. So if you are creating urls to use in class I would advise not accessing them until you need them. Alternatively you can also trick Yahoo into getting the latest data by modifying the url slightly, the easiest way is changing the limit number.

Multi-device – you can update your twitter status from a wide range of devices phones to laptops and everything in between (and using SMS updates means even the most basic phone could be used). Its also very apparent that manufactures are currently falling over themselves to get twitter (and other social networking software) built into their devices (my TV even has a twitter client).

EVSPLUS– using twitter as a EVS allows a natural extension to existing pedagogies. For example, the TwEVS mashup is programmed only to aggregate responses after the hashtag. This means that as well as asking students to indicate a response (A, B, C, D etc.), the tutor could ask students to prefix their response with why they believe the answer is correct. Using twitter to collect responses also opens up a huge degree of flexibility in terms of asking questions on-the-fly, removing some of the restrictions imposed by bespoke EVS software (and you are obviously not limited to A, B, C results).

So far I’ve painted a rosy picture of twitter/EVS integration but there are some obvious issues. One of the biggest is there aren’t that many twitter users and even less under the age of 24. So to use this model would require proactive encouragement from tutors for students to create accounts. There is also issue around the personal/work divide. Will students be happy to include responses in their public timeline?

Another drawback is voting isn’t entirely anonymous and students would even have the ability to check other student responses before replying (which is event easier if students follow their friends). The proposed system is also open to malicious attack. As everything after the hashtag is collected as a response students could get up to all sorts of hijinx to ruin your lovely chart.

Finally something not to be overlooked is the possible distraction element of actively opening back channel communication, although I’m sure there will be situations where this could enhance learning, and giving students an excuse to get lost in their mobile phone.

Putting all these issues aside for one moment, the model of using twitter as a EVS offers a lot of flexibility. As twitter’s search results can be pulled as RSS XML their is endless scope to harvest results and reuse them in a number of ways using either via in-house systems or existing web services. For example it would be very easy to develop a system which removed the dependency on Yahoo Pipes altogether, storing results in a separate local database which could be linked to a student management system or even a custom portal which allowed the continuation of discussion and learning outside the classroom. You also don’t need to only support just one platform, combining results from various status update sites like FriendFeed would be very easy to integrate.

In summary, I hope I’ve stimulated the grey cells and demonstrated one way in which twitter could be used to enhance teaching and learning as a EVS alternative. TwEVS should should be seen as a working prototype and there is no doubt a lot more research to be done in this area. I’m sure with the hype associated with twitter it would be relatively easy to get some project funding to develop some of the ideas outlined above further.