This was a useful post to write and reflect on some ideas. If you are here because you want to make RSS feeds for Scoop.it posts searches here’s the Feed+ Machine Chrome Web App and the standalone Feed+ Machine App

Recently when reflecting on my career path two key moments came to mind. First around 1999 having graduated as a structural engineer I got a job converting course content marked up in Word documents into HTML. Why this was important was I was forced to understand the raw building blocks of the web, I was in a foreign world and I needed to learn the language and fast. 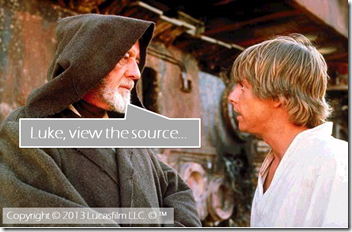 A decade later and my interests shifted, less about static content and more dynamic data. Tapping into the work, primarily of Tony Hirst, my eyes were opened to the opportunity of remixing the web. Taking existing data, a dash of code/3rd party services and creating new things and ideas. In this world data feeds are the new building blocks to play with. In particular RSS and Atom feeds are the prize. Usually openly available and easy to manipulate/render. 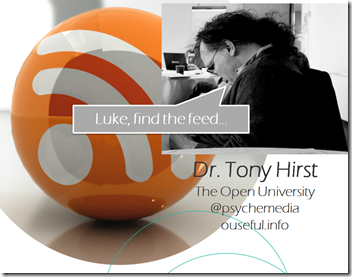 Unfortunately this ease of access appears to be putting off the big 3rd party services. With the latest Twitter API atom isn’t an option, with Google+ RSS feeds should be forgot about. This is a great shame a number of open online courses recognise the value of learners finding their own space, feeding their activity into tools which can aggregate, potentially sense make, and feed the rhizomes of the networked learner.

Like other open courses this is the challenge we face in ocTEL, pulling distributed activity into the machine. For some services RSS is still championed. Diigo where the RSS badge with pride.. 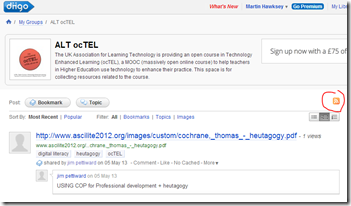 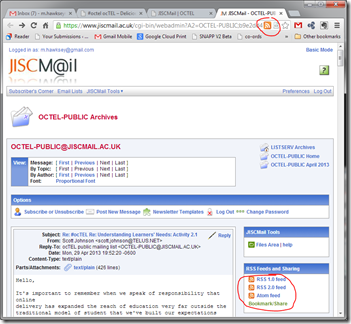 Mendeley … exists but you have to go digging

Google+ … this is where it gets interesting

Eric Koleda has created a Chrome Web App (Feed+) that lets you create RSS(Atom) feeds for Google+ searches. Using Google Apps Script Eric has created a user interface and it does all the negotiation with the Google+ API converting the data into RSS. Given the availability of a Scoopit API and using Eric’s base code I’ve forked the project to create the Feed+ Machine Chrome Web App and the standalone Feed+ Machine App (Google login is required to manage your feeds). To begin with it only supports creating feeds from Scoop.it! post searches, but given Eric has done such a great job on the design it’ll be easy to extend. I’ll spare you the details of the code but the source files are here if you want to unpick what’s going on and ask questions.

Here’s an example of a feed for Scoop.its referencing ocTEL, which we are already digesting in the ocTEL Course Reader. But why do this? My interest is primarily in capturing as much of the digital landscape, each artefact collected adding more detail to the map. Whilst material pulled from Scoop.it is potentially yet another churn of existing content, who is sharing and any insight they add provides additional context and may be another way in which participants can identify and migrate to new clusters of activity.

There is a downside to this to this approach. Having a search feed from Scoop.it is useful but having wrestled with the ScoopIt API there is much more data available not being captured such as metadata around posts and topics. So perhaps like others I should abandon the feed and favour JSON and start filling the Tin Can …

PS NEW!!!CETIS briefing on Activity Data and Paradata for more developments in this area.