In this post I want to cover three things. First I want to introduce a little app I’ve developed which allows you to create a RSS feed for any of your Gmail labels (with the option to remove certain links – useful if you don’t want others unsubscribing you from mailing lists). Secondly I explain how it was made and how you can use it yourself. Finally I want to discuss how this could be used in an open course environment, utilising the vast processing power from services like Twitter and reusing their target marketing emails to your benefit with a bit of ‘dark social judo’.

What is Gmail Label Feeder?

It’s a little Google Apps Script app that you can setup to select one of your Gmail labels, preview content (with the option to remove all the links you’d like not to publish, like unsubscription links) and publish a public feed of the result. This video (embedded below) gives an overview of the problem and how the ‘Gmail Label Feeder’ app works:

How can I setup Gmail Label Feeder and how does it work?

The process covering the creation of individual feeds is covered in the video above. The video below shows the five steps for the initial setup:

Having already used Eric Koleda’s Feed+ script when creating a similar app to turn Scoop.it searches into an RSS feed it wasn’t too much effort to change the source data to a Gmail account. It’s not the first time I’ve hacked the functionality of Gmail having already used my inbox to re-enable Google Reader social share features, so I already knew/had code to GmailApp.search using the ‘label:’ search operator. One thing I struggled with was removing selected links from emails. The UI side was straight forward thanks to the fantastic framework already developed by Eric. Initially I tried Removing html tags and content where tag content matches an array of values using Xml.parse() but as you see from the answer and comments from Jonathan Broughton and Bruce Mcpherson (thanks guys!) I used regex instead (only after getting caught out by line breaks and tabs).

I was first made aware of ‘dark social’ via Alan Cann (who is ironically quoted in the THE today for his work around social media) and in particular his move to email as the main communication tool for students.

Alexis Madrigal at The Atlantic — who writes about the influence of what he calls “dark social” on engagement and traffic patterns. While everyone is busy watching Twitter and Facebook because they are easy to track, Madrigal argues that most social traffic still comes from old-fashioned or difficult-to-track sources like email and chat messages – (From Dark social: Why measuring user engagement is even harder than you think)

The use of email is something we’ve paid particular attention to in the open online course ocTEL, developing a daily newsletter to push a automated summary of course activity (talking about automated summaries read Tony Hirst’s Notes on Narrative Science and Automated Insights). There’s nothing particularly new in this but one whole I wanted to plug was getting an archive of these back into the ocTEL Course Reader (an RSS aggregation of all available course activity), hence the Gmail Label Feeder. Whilst doing this and picking over my own inbox for example emails I started to think about the ‘push’ I got from social sites like Twitter, Google and LinkedIn keeping me aware of activity and making suggestions for people and content I might like. Whilst some of these are very basic action reporting others require a degree of processing to generate.

The particular scenario I had in mind was if for example you were running a course Twitter account, when you get the inevitable ‘suggestions similar to’ or ‘do you know’ would there be some value judo style ’pull when your opponent pushes’ and publishing this content so it’s available to all your students. Even if this is of little individual value to the student wouldn’t aggregating this data in a machine readable way be useful down the line. Have a look at the menu of push options, wouldn’t at least some of these be useful to your students. Should we be doing a bit more dark social judo? 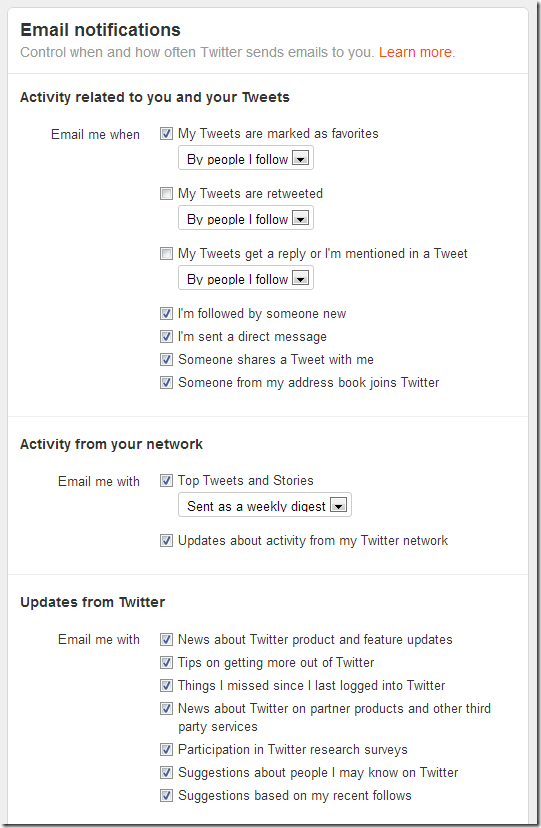