Back in July I started drafting a post about how I use Google Reader as part of my workflow as a RSC e-Learning Advisor. Those days are behind me but I still like to keep up to date with what’s going and highlight stories that I find interesting and others in my network might like too.

The key part which I never got around to writing was the Share and Share with Note buttons. I’d setup these button to do a couple or extra things: using http://reader2twitter.appspot.com/ anything I shared were automatically (and almost instantly using pubhubsubbub) posted on my twitter account (I also experimented with http://ifttt.com/); and links were collated and published monthly as what I starred this month using Craig Fifield’s Shared Item Posts plugin.

The thing I really liked about this setup was the tweeting of links via share worked just as well on the mobile version of Reader which meant I didn’t have to faff with opening twitter clients to share stuff. Here’s a graphic I started which showed the flow:

Unfortunately in Google’s recent refresh of Reader as well as completely borking the user interface (way too much whitespace) share buttons are replaced by ‘share on Google+’ . I’m sure there are ways for me to reconnect the workflow via Google+, but instead I’m going to use it as a opportunity to try something different.

Back in August Doug Belshaw pointed me to Tiny Tiny RSS “an open source web-based news feed (RSS/Atom) aggregator, designed to allow you to read news from any location, while feeling as close to a real desktop application as possible”.

The main thing I’m interested in is being able to publish selected stories to a personal RSS feed which leave me lots of mash-up opportunities. And also if TT-RSS isn’t doing something I like I can hack the code. Win, win, win! (I realise installing something on a webserver won’t be for everyone)

PS there is a great post on persistent.info Google Reader Social Retrospective

The RSCs are all about “stimulating and supporting innovation in learning” and a big part of this is finding and highlight best practice, emerging ideas and occasionally pointing our supported institutions to some cool stuff. In England some of the RSC activity is directed to producing case studies for the Excellence Gateway.

On a more micro level (aka me) I usually spend my lunchtime with a bowel of muesli and Google Reader (for those unfamiliar with Reader it’s an RSS aggregator, and for those unfamiliar with RSS …), sifting through almost 250 feeds trying to find interesting developments in the world of education and technology. And of the 45,905 items I’ve read in the last 6 years how do I share the best bits with you? 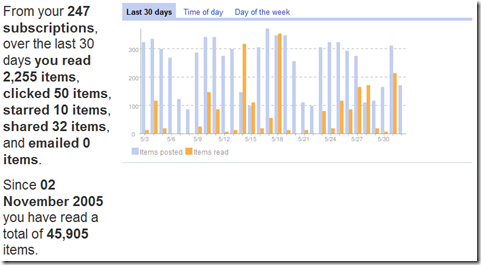 With over 300 items usually hitting my reader each day the first part is using some tools to surface some of the best bits. I do this in a couple of ways. First Reader has an option to take a long list of items and ‘sort by magic’. The ‘magic’ is a personalised ranking based on the items I’ve previously shared with other people. A recent additional tool I’m experimenting with is the Chrome PostRank extension which “uses social statistics from readers online — like you — to determine what’s worth reading”

So I’ve finally found something interesting how do I get the word out. Reader comes with some useful share options shown below: