Over on UK Web Focus Brian Kelly has posted What Twitter Told Us About ILI 2011which gives a breakdown of twitter statistics the recent Internet Librarian International conference #ili2011. These statistics give some of the headline figures of number of tweets, top tweeters etc from Andy Powell’s Summarizr interface for the TwapperKeeper service (recent bought by Hootsuite).

Getting value from Twitter archives is something I’ve looked at in the past with the Twitter subtitling experiments of conference keynotes/TV (not surprisingly there appear to be a growing number of Twitter/TV projects springing up – did Tony and I miss a trick? One to tell the grandkids). My latest offering uses my work in network visualisation to provide an interface for entire events.

Below is what the #ili2011 archive of almost 3,000 tweets by 434 people look like when you start connecting the replies and mentions made to other people (over 1,000 in total). And if you click on a node you can actually drill down into what they tweeted and the replies/mentions they received in the box shown on the right. 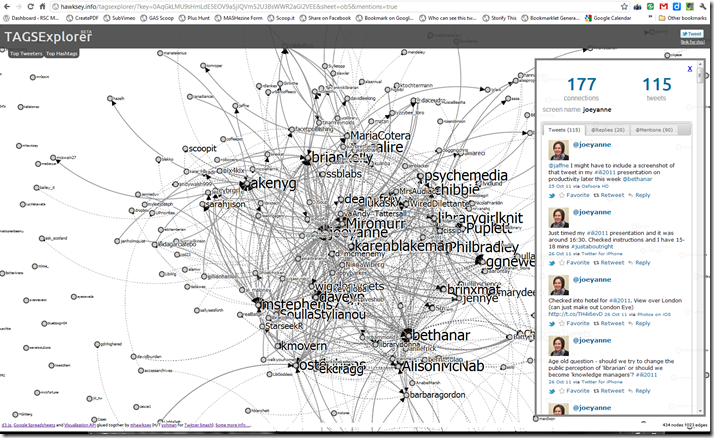 Those with keen eyes will spot that this screenshot is running in a browser window and if you want to play head here for the low res version without mention connections or here if you want to test the capabilities of your graphics card (you’ll need a modern browser to see anything as SVG, despite being a recognised standard for years has only just made it into IE9).

Where is this data coming from? Well it isn’t TwapperKeeper, which also stopped offering an API or data export some time ago. No instead nowadays I suck interesting hashtags into a Google Spreadsheet which sits quietly in the cloud waiting for me to see how I, or anyone else, can twist and pull the data into a more readable shape. You can read more about the technology behind this in TAGSExplorer: Interactively visualising Twitter conversations archived from a Google Spreadsheet and also discover how you can visualise your own Google Spreadsheet of tweets.

I can confirm by using my Using the Viralheat Sentiment API and a Google Spreadsheet of conference tweets to find out how that keynote went down recipe that there were a lot of positive comments :) 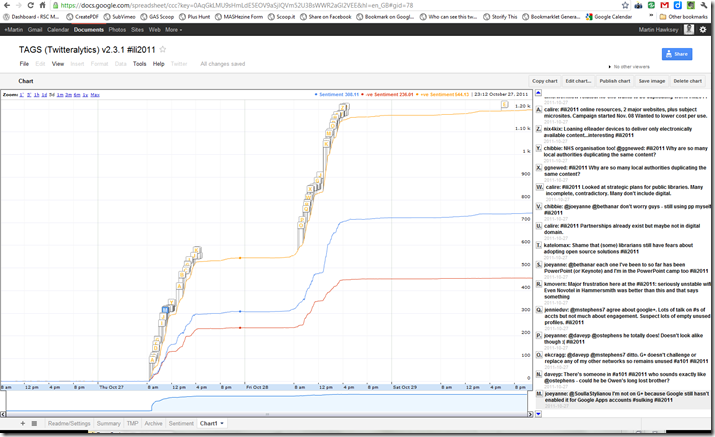 Previous Post: What I’ve starred this month: October 28, 2011
Next Post: I’ve fallen out with Google Reader, we’re on a trail separation (I’m having a fling with Tiny Tiny RSS)