I was delighted to have the opportunity to speak at DevFest London about Google Analytics. One of the huge benefits of being on the Google Developers Experts program is the opportunity to meet experts from other products. In particular, I’ve greatly appreciated connecting with the Google Analytics GDEs. Through meeting them, seeing them talk and following what they do has greatly expanded my own expertise in GA. For my talk at DevFest my aim was to share some of what I’ve learned and to get people thinking about Google Analytics beyond websites and pageviews allowing a glimpse into the opportunities for easy data collection and actionable insight. The talk was entitled ‘The Google Analytics of Things’ and is one I’ve give before but tweaked for the Tech Entrepreneurship strand I was talking in. (slides from my talk can be viewed here).

To demonstrate how easy it was to integrate Google Analytics I developed an example inspired by GA GDE Nico Miceli’s physical analytics experiments where he uses a Raspberry Pi and various sensors to record physical events around his home. An idea I wanted to try was using a Pi camera and face detection to measure audience density. There are various real world applications for this such as estates management and analysing rooms or corridor usage. Achieving this is incredibly easy thanks to the OpenCV (Open Source Computer Vision) library which includes face detection. Using Carlo Mascellani’s Face detection with Raspberry Pi instructions I was sending data to Google Analytics in under 15 minutes. If you’d like to run this yourself here is a gist embedded below:

Given I’d done no prior testing I was very pleased with the results and the setup was able to record and send data to Google Analytics every 60 seconds. By exporting the event data from Google Analytics with a minute index it is possible to graph the average event value: 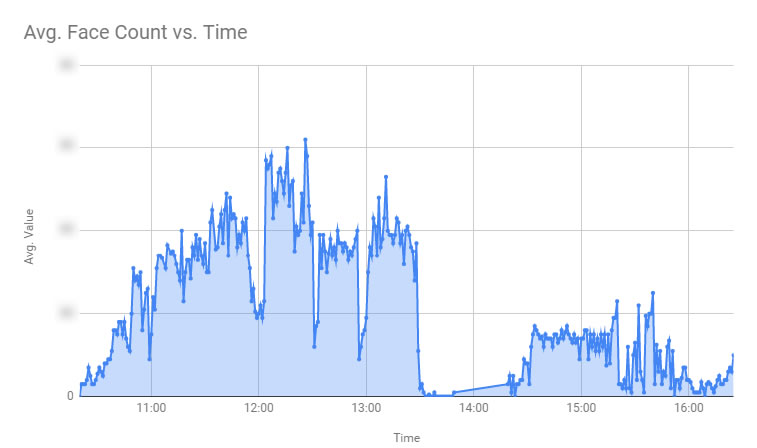 Whilst face detection isn’t 100% accurate (there were a lot more than 40 people at my talk … honest) I’m hopeful others will find this recipe useful and can perhaps, improve and analyse how reliable it is.

For my presentation I tweaked this slightly so the the image with the most faces detected was automatically inserted into it. I could have used the Google Python Client library to do this but being a Google Apps Script kinda guy simply made a POST request from my PI to my Google Slides deck via the new Google Apps Script Slide Service. As posting images in this way might be useful to others here is another Gist with code additions to do this. Below I’ve highlighted the changes and what they do:

This script is published as a web app and the url included in the python code below:

The code above imports the requests and base64 libraries and sets some variables we’ll use later. If using this code you’ll need to include the url from Google Apps Script in the previous step.

Next in the while loop for the image processing if the camera shot contained the most faces detected so far the image is base64 encoded and sent as a POST request to the published web app url setup for our Slides deck.

The complete modified python code is in this gist.

I hope you find this experiment useful and another example of how Google Analytics can support lean actionable insight.

Previous Post: Machina a machina: An introduction to APIs with Google Sheets
Next Post: Everything you always wanted to know about Google Apps Script Manifest Files (but were afraid to ask…)