At the beginning of my contribution to the OU’s OER Research Hub project it was interesting to see a post by Martha Burtis (University of Mary Washington) on WordPress as a Data Collection Tool. There are a number of parallels between the work Martha has been doing and the OER Research Hub alpha and it was nice to see someone take a similar approach, essentially using the existing WordPress architecture to create a custom interface for data entry and display. In my last post I primarily focused on the data architecture and entry for the OER Evidence Hub and as this phase of the project comes to an end I thought it would be useful to highlight some of the solutions developed to allow people to navigate and explore the growing data set.

It seems to my that parts of the OER community are obsessed with geography. It’s a topic that has been tackled multiple times, the recent UNESCO/COL OER World Map discussion and subsequent request for proposals being an indication that people still want to make a mark. When asked to include a map in OER Research Hub I wanted it to convey more than just geography. Below is a screenshot of what I came up with (but you are better playing with the interactive version): 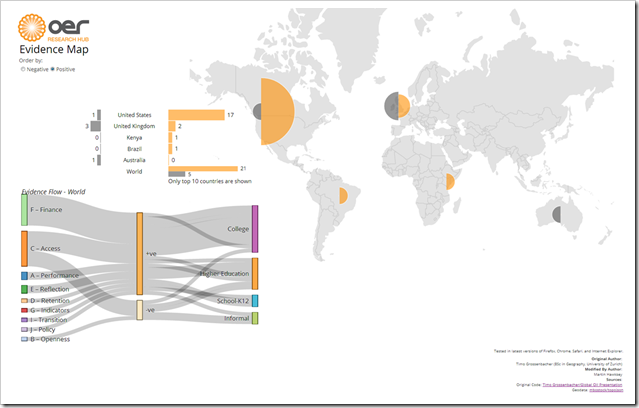 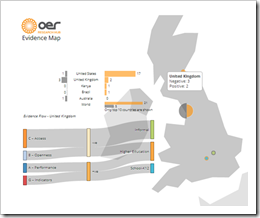 The map is a reworking of Timo GrossenbacherGlobal Oil Presentation which is published under a MIT licence (HT @psychemedia for pinging this into my stream). The two main additions are to make the map zoomable by clicking on a country and a Sankey diagram to let people see the flow of data from a hypothesis (evidence is being collated for the project around a set of hypotheses. The evidence is tagged with a polarity (positive or negative) and a sector (informal, school, college or HE) .

All the nodes and paths in the Sankey are active links providing a way for the user to navigate the data. The Sankey is also redrawn when the map is zoomed to filter evidence for that country. The data for the map is initially extracted from the WordPress database, reshaped server-side before being embedded on the page as JSON. The main reasons for doing it this way is because the plugin has it’s own built-in cache so rather than multiple queries and processing only one query to return the rendered data is required.

So we can see in the world view that the majority of evidence has been collected around hypothesis C – Access and F – Finance. Clicking on a hypothesis node a similar technique is used for the individual hypothesis pages which again use a Sankey diagram as navigational aid. The data for this which includes custom fields and taxonomy values is again being cached by the plugin. To remove dependency from a specific theme the plugin includes a number of shortcodes to render elements like evidence metadata which are then added to the post content. For example, clicking on an evidence link the page contains two grey regions with evidence metadata, the top box containing links to discover other evidence based on the facets: polarity, sector, country and hypothesis. 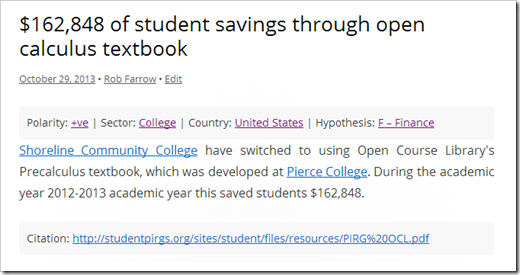 A more ‘traditional’ evidence map has also been created. Fully embracing the open philosophy whilst this map on cursory inspection looks like an embedded Google Map it is in fact the community built OpenStreetMap rendered using the open source LeafletJS library. LeafletJS comes with a long list of extra plugins and for now the only one used is the Overlapping Marker Spiderfier, but if the map is developed further there is an opportunity to grow functionality by including additional plugins. 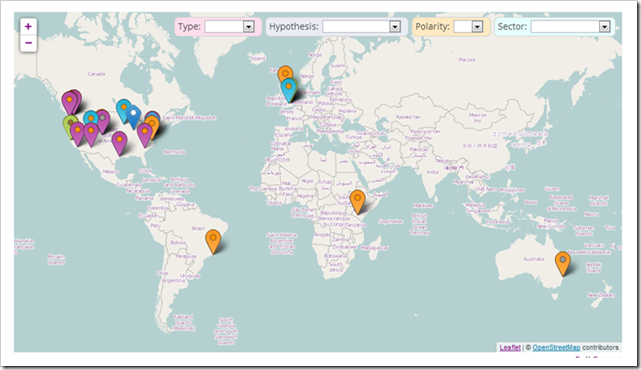 This map was also an opportunity to think about APIs for other people to mashup the evidence hub data. Currently in use is

[Like a lot of projects these haven’t been documented properly yet and something being saved for the next phase. This functionality has been achieved by extending the JSON API plugin. This also has endpoints for create_post , update_post and delete_post , which haven’t been enabled but will probably be a useful way to get evidence into the hub.

The next phase of this part of the project is still to be decided, but in the meantime your feedback is very welcome and the code is available here.