On Friday (31st August) I was at eAssessment Scotland 2012. This is an event I’ve had a long running involvement with and it’s always a pleasure to travel up to Dundee with around 300 other delegates to attend one of the premier eAssessment events in the UK (if not Europe the world). Sheila was also at the conference at has already posted some notes and there isn’t much for me to add (although I do want to write something on Open Badges after attending Doug Belshaw’s session). Instead I wanted to have a quick look at the conference twitter backchannel.

The archive of 1196 tweets taken between 23rd August and 3rd September has contributions from 184 twitter accounts. The median number of tweets per account was 2. 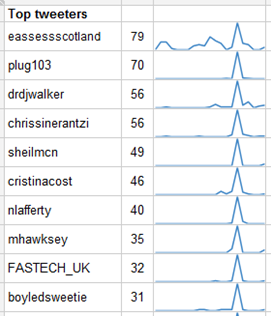 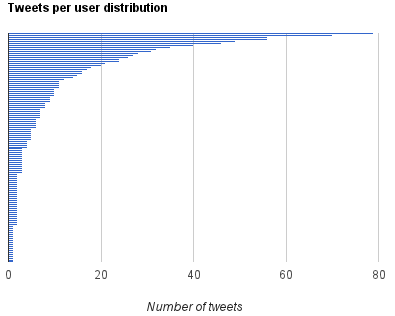 As well as monitoring the number of tweets being posted during the day, following on from my work on analysing threaded Twitter discussions from large archives using NodeXL #moocmooc, I included the number threaded replies* in the archive. Of the 1,196 #eas12 tweets 10% (n.115) were threaded replies. I was able to monitor this in real-time with the graph below which is embedded in the dashboard.

*the metadata from Twitter includes a ‘in reply to id’ field which identifies if the tweet is part of a thread. This isn’t 100% accurate as it is only recorded if the user uses a reply button. 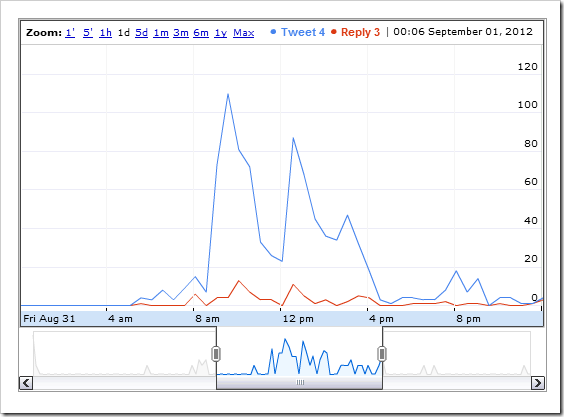 Graph of tweets and threaded replies at #eas12

At the time I commented:

which was responded to (as a threaded reply which creates all sorts of problems from Twitter’s embedded tweet option):

@mhawksey What does that say about us then… (/makes effort to think, edit and RT…) :D #eAS12

@plug103 perhaps if the person at the front is in broadcast mode then it’s okay for us to be our own individual mini-broadcasters ;) #eas12

So how does this compare with #moocmooc. Hopefully the graph below illustrates this (interactive version here), but in numbers the ‘#moocmooc archive contains 6,883 tweets where 44% (n.3046) are conversation threads. 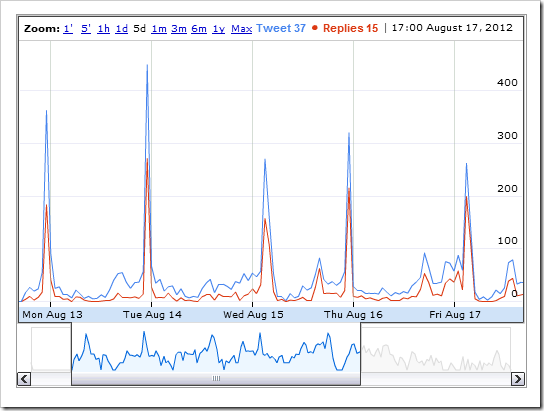 Graph of tweets and threaded replies at #moocmooc

It’s perhaps not surprising that different modes of twitter usage produce different conversation patterns. Next week I’ll be at ALT-C 2012 in Manchester where I’ll also be monitoring the twitter backchannel. This is a 3 day event aimed at learning technologists so it’ll be interesting to see if a different pattern of usage emerges.

Something else I’m reminded preparing the TAGSExplorer view of eas12 (graph of replies – solid lines, and in this case mentions – dashed lines, between twitter account using eas12 hashtag) is that there is more interaction going on that could be analysed (there’s a PhD in all of this – if Twitter keep the data flowing). 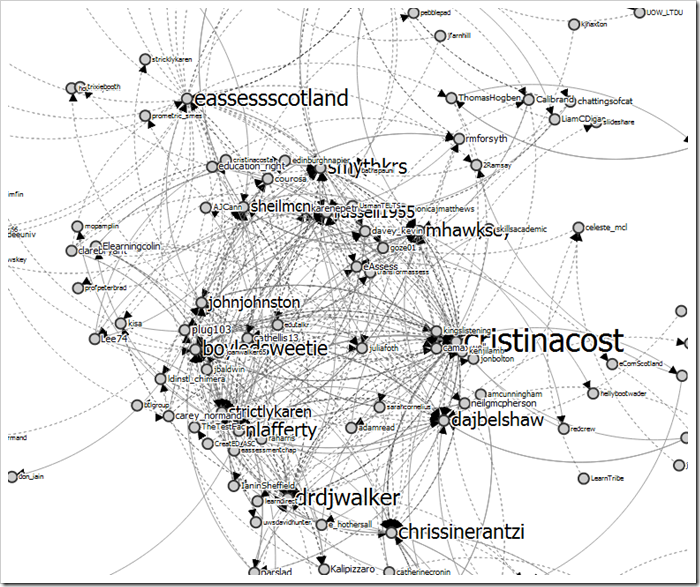