Skip to content
Update: Here’s the updated Topsy Media Timeline Google Spreadsheet Template v2.1, which pulls data straight from Topsy. Follow the instructions in this template for your own Twitter/Topsy media timeline

Recently I posted an Experiment to dynamically timeline media posted on Twitter using Topsy and Timeline (my contribution to @Arras95) #arras95 which uses a Yahoo Pipes to extract tweets with images and videos using the Topsy Otter API, which is then pulled into a Google Spreadsheet before being rendered in a Timeline tool developed by Vérité.

This recipe appears to be working, that is the timeline is automatically updating with new media. There’s a separate question about practicality of the timeline and navigation which I’m quietly ignoring, instead I want to highlight some technical hit/misses and present a revised version.

Because Topsy includes tweets to image sites like twitpic and yfrog in the search results, which redirect to those sites rather than having an image source url these appear in frames (up until recently Timeline used the snapito.com API to convert into a thumbnail but this was recently removed because the free service was stopped). 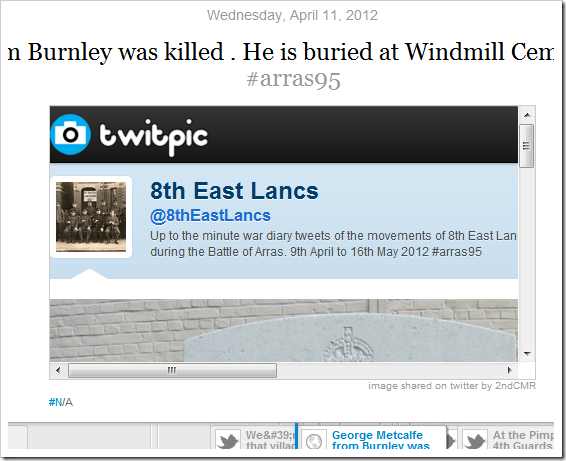 To get around this I’ve modified the source Yahoo Pipe to only let image urls (new source Pipe here). This limits results to those uploaded via the Twitter official interfaces (e.g. Web/New Tweetdeck). Update: I’ve now coded the data collection from Topsy directly in the Google Spreadsheet using Google Apps Script. New version is available via the link at the end of the post.

If you wanted to replicate the original experiment another drawback was that you would have to host the Timeline code somewhere. As not everyone has easy access to a web host I’ve published an interface which lets you include the published Google Spreadsheet key in the URL. Here’s an example for #cam12

Here’s a new version of:

[PS I’m looking forward to seeing what Sam comes up with using Timeline ;)]

Previous Post: Crowdsourced funding: Open education for the people, by the people
Next Post: Pitch for out-of-hours project: Develop a Chrome extension to include Creative Commons license in embed code