There’s a new kid on the block if you are considering an open source timeline tools. For a long time the Simile Exhibit Timeline tool has been the tool of choice appearing in places like Freebase.com (click on Timeline in this page to see a history of internet search engines).

A nice feature of ‘Timeline’ is it’s focus on making it easy to embed content from other sites including individual tweets, videos from YouTube and Vimeo, images hosted on Flickr or with a direct url and audio from SoundCloud. Here’s an out-of-the-box example (I tried to use the embed code in this post but it seems to conflict with some of blog theme code (a jQuery problem))

I wanted to try out ‘Timeline’ to see how it preformed under different use cases. The two I had in mind were: Timeline/Google Spreadsheet as a simple OER creation tool (in part influenced by Pat Lockley’s post on using Google Maps as an OER authoring tool); and using Google Spreadsheet’s built-in functions to scrape and automagically publish information into a dynamic timeline.

The first case is fairly easy to do using the template and instructions on the Timeline site (although more complicated than Pat’s example). A couple of ‘gotchas’ for you. When I changed the spreadsheet setting to United Kingdom formats it messed up the dates on the timeline. I also had problems using Google Maps with external KML files (I’ve opened an issue). On to the fun bit though, gluing webservices together to generate dynamic timelines.

Because Google Spreadsheet sits in the cloud and has a number of ways to get live data feeds in they are great for gluing data streams together and republishing in different formats. Also as Timeline likes Google Spreadsheets all we need to do is get some data in a format Timeline likes and it should happily start updating itself … in theory anyway.

The data side left me scratching my head a bit. There’s lots of data out there its just finding some with readable timestamps. I had thought about pulling information from Wikipedia but found tables of dates not particularly machine readable. Then I started reading about the @Arras95 event which is happening as part of the JISC funded WW1C project run by the University of Oxford.

Between the 9th April and 16th May 2012 an experiment in social media will take place. We will tweet the events of the Battle of Arras in realtime, from the perspective of a neutral reporter on the field. What makes this Twitter event different from other realtime tweeting initiatives (and there are some great ones out there!) is that @Arras95 will engage online communities, crowdsourcing facts about Arras and the individuals who played a part, asking for reappraisals and additions to the action as it happens.

You can read more about how to get involved in the Contribute. Collaborate. Commemorate. I could just scrape the @Arras95 tweets and put them in Timeline, but where would the fun be in that ;) Instead I want to capture some of the visual richness. Whilst I could start to unpick media links to videos and images from the official Twitter stream, there’s no need as the social web search site Topsy already does this and the data is accessible via the Topsy Otter API.

As Arras95 hasn’t started yet here’s an example call to #ukoer looking for video. The result is in JSON which is usually great for other mashups but unfortunately it’s a format Google Spreadsheet’s doesn’t like (although you can handle it with Google Apps Script, but on this occasion I was trying to avoid that route). Instead I turned to Yahoo Pipes, which hopefully won’t disappear just yet despite Yahoo laying off 2,000 of its staff this week. 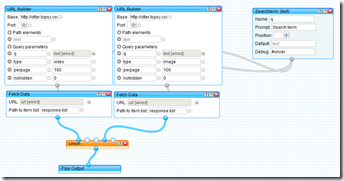 Pipes is right at home with JSON and what’s more (despite hiding the option) you can output the data in .csv which Google Spreadsheet does like. Here’s a Pipe which builds a search query for images and videos posted on Twitter for a user entered search term. I’ve also prepared a slightly different Pipe which has the search hard-coded as well as pulling tweets from the @Arras95 twitter account (in both these you can edit/clone the source)

Piecing it together – importing Yahoo Pipes into Google Spreadsheets

From the Timeline site there is a Google Spreadsheet Template. This gives us the format we need to get the data in. For now lets keep working with #ukoer as this gives us some data to play with. Here’s a copy of the template with an extra sheet called data. In cell B1 of the data sheet is the formula:

This comes from running the Pipe with a search term and copying the ‘Get as RSS’ link, which is:

You’ll see I’ve highlighted two parts of this url. At _render I’ve changed rss to csv and in the formula the search term is replaced by a cell value (the latter was so I could share/reuse the template). I should say urlencode is a custom formula I wrote using Apps script to encode the search term. It’s a nice little ditty that goes like this:

Down column A of data there is another custom function to convert entity numbers into characters eg turn &#39; into apostrophe’s. That particular ditty goes:

Back in the spreadsheet on the ‘od1’ sheet we start pulling in the bits of data we need for the timeline. This mainly uses ArrayFormulas in row 3 to populate all the data without having to manually fill in the column. For example in D3 we have:

Slapping it into a Timeline

All that’s left to do is in the spreadsheet File > Publish to the web… and then find somewhere to host your timeline page. So that you can see what it looks like here’s one for #ukoer. 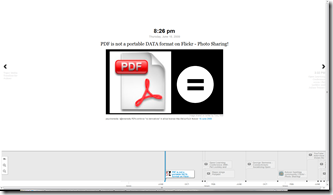 Here is the @Arras95 timeline and the source spreadsheet.

Nothing much to see now apart from a test tweet. The theory is that this will self populate over time as data filters into Topsy. It’ll be interesting to see if it actually works or if I need to set up a Apps Script trigger for force a refresh.

If you would like to make your own dynamic timeline from tweeted media here’s: