It’s the last day of the OER Visualisation Project and this is my penultimate ‘official’ post. Having spent 40 days unlocking some of the data around the OER Programme there are more things I’d like to do with the data, some loose ends in terms of how-to’s I still want to document and some ideas I want to revisit. In the meantime here are some  of the outputs from my last task, looking at the #ukoer hashtag community. This follows on from day 37 when I looked at ‘the heart of #ukoer’, this time looking at some of the data pumping through the veins of UKOER. It’s worth noting that the information I’m going to present is a snapshot of OER activity, only looking at a partial archive of information tweeted using the #ukoer hashtag from April 2009 to the beginning of January 2012, but hopefully gives you an sense of what is going on.

I revisited the heart after I read Tony Hirst’s What is the Potential Audience Size for a Hashtag Community?. In the original heart nodes were sized using ‘betweenness centrality’ which is a social network metric to identify nodes which are community bridges, nodes which provide a pathway to other parts of the community. When calculating betweenness centrality on a friendship network it takes no account of how much that person may have contributed. So for example someone like John Robertson (@KavuBob) was originally ranked has having the 20th highest betweenness centrality in the #ukoer hashtag community, while JISC Digital Media (@jiscdigital) is ranked 3rd. But if you look at how many tweets John has contributed (n.438) compared to JISC Digital Media (n.2) isn’t John’s potential ‘bridging’ ability higher?

There may be some research in this area, and I have to admit I haven’t had the chance to look, but for now I decided to weight betweenness centrality based on the volume of the archive the user has contributed. So John goes from ranked 20th to 3rd and JISC Digital Media goes from 3rd to 55th. Here’s a graph on the winners and losers (click on the image to enlarge).

Here is the revised heart on zoom.it (and if zoom.it doesn’t work for you the heart as a .jpg 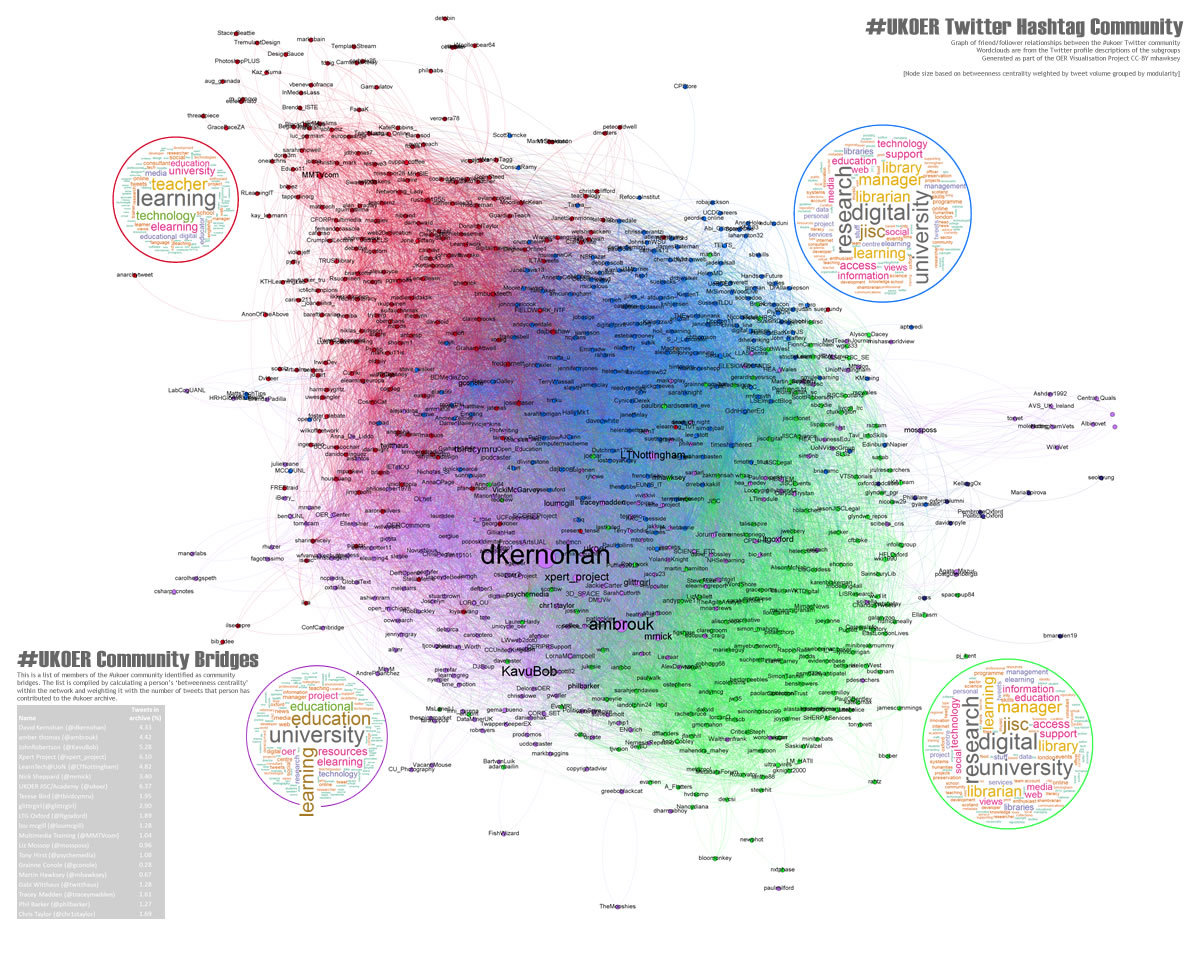 [In the bottom left you’ll notice I’ve included a list of top community contributors (based on weighted betweenness – a small reward for those people (I was all out of #ukoer t-shirts).]

These slides also show the difference in weighted betweenness centrality (embedded below). You should ignore the change in colour palette, the node text size is depicting betweenness centrality weight [Google presentation has come on a lot recently – worth a look at if you are sick of the clutter of slideshare]:

In previous work I’ve explored visualising Twitter conversations using my TAGSExplorer.  Because of the way I reconstructed the #ukoer twitter archive (a story for another day) it’s compatible with this tool so you can see and explorer the #ukoer archive of the 8300 tweets I’ve saved here. One of the problems I’m finding with this tool is it takes a while to get the data from the Google Spreadsheet for big archives.

This problem was also encountered in Sam’s Visualising Twitter Networks: John Terry Captaincy Controversy. As TAGSExplorer internally generates a graph of the conversation, rather than scratching my head on some R Script it was easy to expose this data so that it can be imported into Gephi. So now if you add &output=true to a TAGSExplorer url you get a comma separated edge list to use with you SNA package of choice (the window may be blocked as a pop-up, so you need to enable). Here is the link for the #ukoer archive with edges for replies, mentions and retweets (which generates ‘a ball of awesome stuff’ (see insert above) but will eat your browser performance) 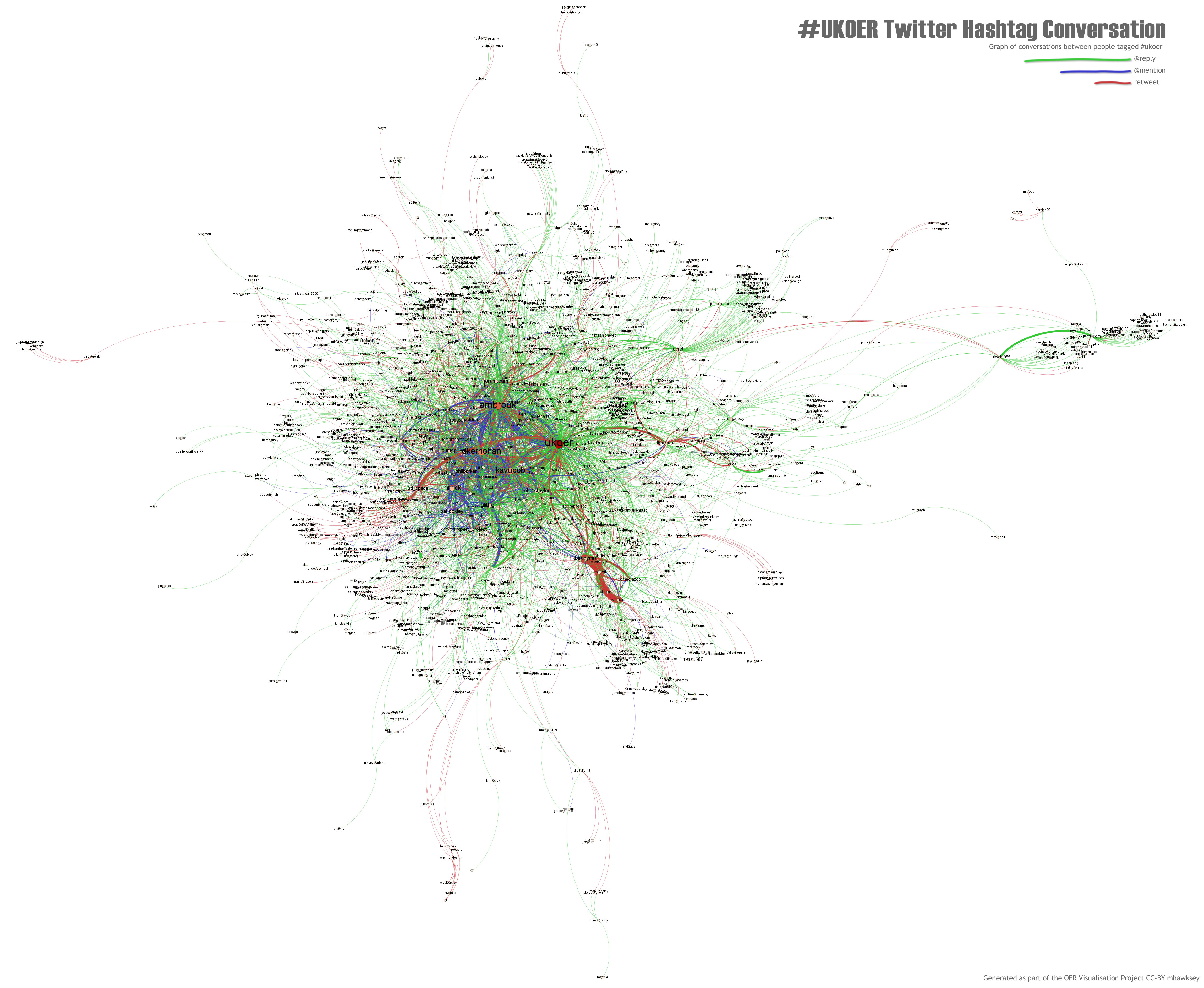 Processing the data in Gephi you get a similar ball of awesome stuff (ukoer conversation on zoom.it | ukoer conversation .jpg). What does it all mean I hear you ask. These flat images don’t tell you a huge amount. Being able to explore what was said is very powerful  (hence coming up with TAGSExplorer). You can however see a lot of mentions (coloured blue and line width indicating volume) in the centre between a small number of people. It’s also interesting to contrast OLNet top right and 3d_space mid left. OLNet has a number of green lines radiating out indicating @replies indicating they are in conversations with individuals using the #ukoer tag. This compares to 3d_space which has red lines indicating retweets suggesting they are more engaged in broadcast.

Is there still a pulse?

When looking at the ‘ball of awesome stuff’ it’s important to remember that this is a depiction of over 8,000 tweets from April 2009 to January 2012. How do we know if this tag is alive and kicking or not just burned out like a dwarf star?

The good news is there is still a pulse within #ukoer, or more accurately lots of individual pulses. The screenshot to the right is an extract from this Google Spreadsheet of #UKOER. As well as including 8,300 tweets from #ukoer it also lists the twitter accounts that have used this tag. On this sheet are sparklines indicating the number of tweets in the archive they’ve made and when. At the top of the list you can see some strong pulses from UKOER, xpert_project and KavuBob. You can also see others just beginning or ending their ukoer journey.

The good news is the #ukoer hashtag community is going strong December 2011 having the most tweets in one month and the number of unique Twitter accounts using the tag has probably by now tipped over the 1,000 mark.

There is more for you to explore in this spreadsheet but alas I have a final post to write so you’ll have to be your own guide. Leave a comment if you find anything interesting or have any questions

[If you would like so explorer both the ‘heart’ and ‘pulse’ graphs more closely I’ve upload them to my installation of Raphaël Velt’s Gexf-JS Viewer (it can  take 60 seconds to render the data). This also means the .gexf files are available for download:]