Following on Day 20’s Maps, Maps, Maps, Maps the last couple of days I’ve been playing around with timelines. This was instigated by a CETIS PROD ‘sprint day’ on Friday where Sheila MacNeill, Wilbert Kraan, David Kernohan and I put our thinking caps on, cracked the knuckles and look at what we could do with the CETIS PROD data.

Creating a timeline of JISC projects from PROD is not new, Wilbert already posting a recipe for using a Google Gadgetized version of MIT’s SIMILE timeline widget to create a timeline of  JISC e-Learning projects. I wanted to do something different, trying to extract project events and also have more timeline functionality than offered by the SIMILE gadget. My decision to go down this particular route was also inspired by seeing Derek Bruff’s Timeline CV which renders Google Spreadsheet data in a full feature version of the SIMILE timeline widget (an idea that Derek had got from Brian Croxall). 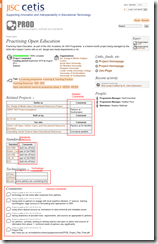 Having already dabbled with the PROD data I knew CETIS staff have annotated JISC projects with almost 3,000 individual comments. These can be categorised as general and related projects comments and comments associated with technology and standards choices (you can see this rendered in a typical project page and highlighted in the graphic).

Discovery number one was that all the comments don’t have timestamp  information in the linked data (it turns out only general comments have these). Ignoring these for now and seeing what happens if we create a SPARQL query, import the data into a Google Spreadsheet, format and then wrap in a HTML page we get this JISC CETIS PROD Comment Timeline:

The good – search and filtering strands; information popups render well; user can resize window; easy export options (activated when mouseover timeline via orange scissors)
The bad – too many comments to render in the timeline; the key under the timeline can’t render all the strands

One of the suggestions at ‘show and tell’ was to focus on a particular area like technology to see if there were any trends in uptake and use. As mentioned earlier there are currently no timestamps associated with technology comments and it was suggested that project start and end dates could be used as an indication. So using the same recipe of SPARQL query, formatting data in a Google Spreadsheet to a HTML page we get the CETIS PROD Tech Timeline.

Again the default view presents information overload which is slightly alleviated by filtering. I still don’t get any sense of wave of technologies coming and going, partly because the project start/end dates and maybe it very rare for a technology to die.

Trying to take a more focused view it was suggested I look at a programme level timeline of general comments (being general comments means they are individually timestamped). Using the recipe one more time of SPARQL query, formatting data in a Google Spreadsheet to a HTML page we get the CETIS PROD OER Phase 1 & 2 timeline.

Still there is a problem navigating the data because of clustering of comments (shown by the string of blue dots in the bottom timebar). So what’s going on here? Looking at the data it’s possible to see that despite the fact that general comments could have been made at any point in the two years of the programme 912 comments were made on only 73 different days (which partly makes sense – ‘going to sit down and do some admin, I’ll review and comment on project progress’).

So timelines are maybe not best for this type of data. At least there’s a recipe/template used here which might help people uncover useful information. There is an evolution of this combining timelines and maps that I’m working on so stay tuned.