Dear Diary, it is now day 20 of the OER Visualisation Project … One of the suggested outputs of this project was “collections mapped by geographical location of the host institution” and over the last couple of days I’ve experimented with different map outputs using different techniques. Its not the first time I’ve looked at maps and as early as day 2 used SPARQL to generate a project locations map. At the time I got some feedback questioning the usefulness of this type of data, but was still interested in pursuing the idea as a way to provide an interface for users to navigate some of the OER Phase 1 & 2 information. This obsession shaped the way I approached refining the data, trying to present project/institution/location relationships, which in retrospect was a red herring. Fortunately the refined data I produced has helped generate a map which might be interesting (thought there would be more from London), but I thought it would also be useful to document some of what I’m sure will end up on the cutting room floor.

Filling in the holes

One of the things the day 2 experiment showed was it was difficult to use existing data sources (PROD and location data from the JISC Monitoring Unit) to resolve all host institution names. The main issue was HEA Subject Centres and partnered professional organisations. I’m sure there are other linked data sources I could have tapped into (maybe inst. > postcode > geo), but opted for the quick and dirty route by:

Satisfied that I had enough lookup data I created a sheet of OER Phase 1 & 2 project leads/partners (filtering Project_and_Partners and pasting the values in a new sheet). Locations are then resolved by looking up data from the InstLocationLookup sheet.

Exporting the OER Edge List as a csv allows it to be imported to the Social Network Analysis add-on for Excel (NodeXL). Using the geo-coordinates as layout coordinates gives: 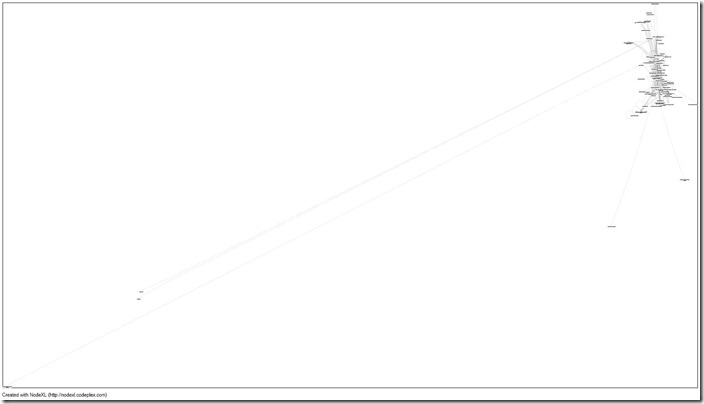 The international partners mess with the scale. Here’s the data displayed in my online NodeXL viewer. I’m not sure much can be taken from this.

KML is an XML based format for geodata originally designed for Google Earth, but now used in Google Maps and other tools. Without a templating tool like Yahoo Pipes which was used in day 2, generating KML can be very laborious. Fortunately the clever folks at Google have come up with a Google Spreadsheet template – Spreadsheet Mapper 2.0. The great thing about this template is you can download the generate KML file or host it in the cloud as part of the Google Spreadsheet.

The instructions for using the spreadsheet are very clear so I won’t go into details, you might however want to make a copy of the KML Spreadsheet for OER Phase 1 & 2 to see how data is being pulled from the PROD Spreadsheet. The results can be viewed in Google Maps (shown below), or viewed in Google Earth. 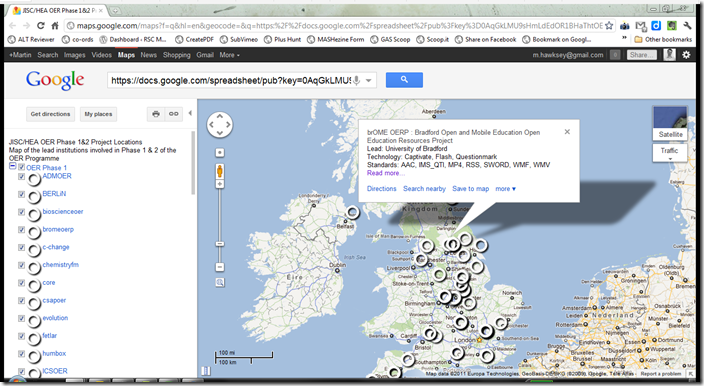 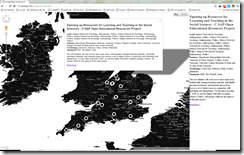 Another example I game across was using a Google Spreadsheet source which gives this other version of OER Phase 1 & 2 Lead Institutions rendered from this sheet.

I haven’t even begun on Google Map Gadgets, so it looks like there are 101 ways to display geo data from a Google Spreadsheet. Although all of this data bashing was rewarding I didn’t feel I was getting any closer to something useful. At this point in a moment of clarity I realised I was chasing the wrong idea, that I’d made that schoolboy error of not reading the question properly.

Having already extracted ‘ukoer’ records from Jorum and reconciling them against institution names in day 11 it didn’t take much to geo-encode the 9,000 records to resolve them to an institutional location (I basically imported a location lookup from the PROD Spreadsheet, did a VLOOKUP, then copy/pasted the values. The result is in this sheet)

For a quick plot of the data I thought I’d upload to Google Fusion Tables and render as a heatmap but all I got was a tiny green dot over Stoke-on-Trent for the 4000 records from Staffordshire University. Far from satisfying.

The final roll of the dice … for now anyway. MarkerClusterer is an open source library for Google Maps API which groups large numbers of closely located markers for speed and usability gains. I’d never used this library before but the Speed Test Example looked easy to modify. This has resulted in the example linked at the very beginning of this post mapping Jorum ukoer records.

This is still a prototype version and lots of tweaking/optimisation required and the data file, which is a csv to json dump has a lot of extra information that’s not required (hence the slow load speed), but is probably the beginnings of the best solution for visualising this aspect of the OER programme.

So there you go. Two sets of data, 6 ways to turn it into a map and hopefully some hopefully useful methods for mashing data in between.

I don’t have a ending to this post, so this is it.