I keep getting this nagging voice in my head to do something with Google+ and Google Spreadsheets. I’ve resisted until now as I don’t think there is enough of an official API there to satisfy my current interest in social network analysis. This hasn’t stopped other people from getting off the beaten track and developing some really useful stuff. 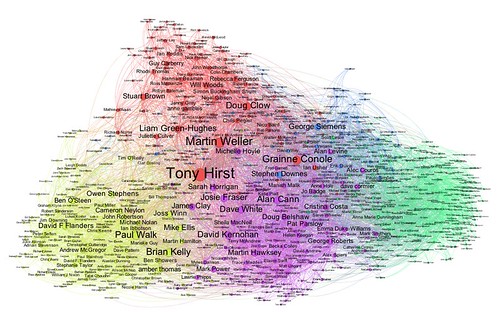 A while ago Tony (Hirst) posted a Fragment: Looking up Who’s in Whose Google+ Circles…,which highlights how friend and follower information can be extracted from Google using an undocumented API. Tony followed this up with So Where Am I Socially Situated on Google+? in which he used a genius bit of Python scripting to extract a large fragment of his extended Google+ network which he then processed in Gephi.

Here’s my take on the problem, a Google Spreadsheet template to extract Google Plus network information for analysis in the tool of your choice, in my case NodeXL.

If you want to go and play straight away here’s a link to:

Below is an example output from my network generated in NodeXL (and a copy in my online NodeXL viewer ;):

Instructions for use are contained in the Spreadsheet Readme sheet. My top tip is be patient, it can take a while to grab the data so don’t be alarmed if a minute goes by without a notification from the sub-level run. If nothing is happening after 5 minutes something has gone wrong to try running ‘Google+ > Start/continue collection’ again (it should continue from where it left off). Also this script is hot off the press so if you are having problems comments are very welcome.

One other very important caveat is looking at the execute logs the script isn’t getting friend data for everyone. Not entirely sure why but might be Google trying to prevent use of an undocumented API. This means some nodes (in one sample 10%) are lacking outbound data.

Getting data into NodeXL

Using Google Spreadsheet/Google Apps Script I can’t the same extent of information (where Tony got a sample of who his friends were also following I’m just getting which of my friends follow each other). This is because Apps Scripts are executed server-side and automatically timeout after around five minutes. Even with a more focused data set in mind I was finding I could processed all the data in 5 minutes so had to resort to breaking the process into chucks using the build-in ScriptProperties (it’s like a script cookie) to store where the process was up to.

Caching in the Cloud with Google Apps Script

Google recently announced the addition of a CacheService in Google Apps Script. In Tony’s original code he was also caching responses from APIs to prevent multiple lookups. In my version there is less need for caching as I only make one grab for each friend or follower. I still implemented the CacheService as a way to backup a sublevel processing run. The scenario being you get most of the way through the 50 calls per block when the script fails, the next time it can just re-read the data it already got from the cache speeding things up. Doing this I did however find the limits of the CacheService:

Below is how the function for this ended up looking (I’m I’m sure it can be refined – I’m just a hobbyist coder). The full code is here.

chevron_left NodeGL: An online interactive viewer for NodeXL graphs uploaded to Google Spreadsheet
Why Tesco might be offering free in-store wi-fi: To track you? chevron_right