So we are now into week 2 of the open course in Learning and Knowledge Analytics LAK11. Whilst I’m already doing better at this course than PLESK10 I would still only class my involvement as periphery participation so I’ll be no doubt be revisiting the LAK11 syllabus again at a later date. A couple of things I’ve picked up from week 1 you might be interested in:

The only paper I had a chance to properly read was Elias, T. (2011) Learning Analytics: Definitions, Processes, Potential. It was more luck than anything else that I started here but I was very glad of the fortune [it was only later that I read Dave Cormier’s MOOC newbie voice – a slackers entrance into lak11 post which reassured me that although I wasn’t doing much at least it was the right thing].

Things I took away from the paper were:

Overall the paper was very useful in highlighting how much I didn’t know, but was an indication of the things I might need to know [whilst it might not sound like it this is a positive outcome to let me self-regulate my learning].

Some things on participating on the course in general 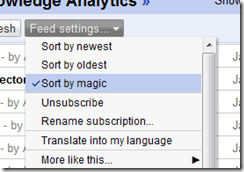 There were other things I did during week one including playing the the recommendation search engine hunch. This experience was juxtaposed to the course moodle site, which was blindly sending me hundreds of emails from the course discussion forums. In the end I decided to unsubscribe to the email notifications and pull the forum into Google Reader via RSS. My hope was Google Reader would ‘sort by magic’ to pull interesting things to the top, but the algorithm is struggling to do anything other than chronologically order the feed [my guess is Google don’t have another data for my personal or group preferences – ho hum ;)]