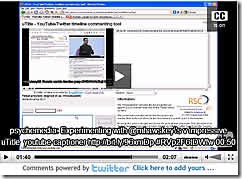 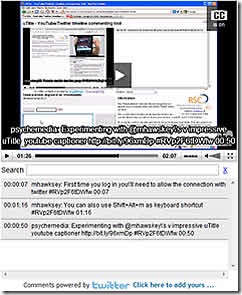 Having added embed options for the Twitter subtitling of live events (iTitle), it made sense to include these with the Twitter/YouTube commenting tool (uTitle). As both these tools have some code in common adding embed options for the player and player+navigation was relatively straight forward. So now you can embed Twitter commented YouTube videos in other sites.

But what about providing an interface to let people comment on videos from your own site? This is now also possible … kind of.

Using the same method for embedding the player with jump navigation <iframe>, it is possible to just make a bigger one which includes the whole of the screen. The issue I haven’t been able to resolve is that the user needs to authenticate via Twitter. This processes unfortunately breaks the user out of the <iframe>, before automatically redirecting back them back to the comment interface on http://www.rsc-ne-scotland.org.uk/mashe/utitle/. My preference would be if a users is making a comment via uTitle embedded on www.yourweb.com that you stay on that site.

A possible workaround would be for www.yourweb.com to host their own version of the uTitle interface. So here it is the uTitle source code on github.

That just leaves the WordPress plugin. This was suggested by Dries Bultynck
in response to the original uTitle post. As I plan on using commentable videos on this blog it seemed like a good idea to put something together on this. So here it is the WordPress uTitle Plugin. This turns a custom shortcode into an embed/iframe.