In the last couple of weeks I’ve given Google Wave presentations to the Scottish Blackboard User Group (Scot-BUG) and the Scottish Moodle User Group (SMUG). These have been designed to be introductory session Google Wave giving an overview of the technology and how it could be integrated into existing institutional systems like VLEs.

This post contains follows the narrative I used for the presentations with some additional thoughts and resources. Here is the  PowerPoint used for Scot-BUG and SMUG (some edits)

Here’s a nice video from EpipheoStudios.com which gives a quick overview of Wave:

The basic message is email works for basic communication but when you do anything which potentially involves more than two people it can get complicated.

The current Wave interface is entirely browser based and you don’t need any additional plugin’s for basic functionality (for drag and drop of files you need Google Gear’s installed). The interface uses the latest HTML standards so you need to use either Chrome, Firefox or Safari. Already 3rd party developers are developing desktop systems and I wouldn’t be surprised if it was incorporated into Mozilla’s new communication application ‘Raindrop’.

The current interface uses a 3-column layout not too dissimilar to your standard email client. Working from left-to-right you have navigation/contacts, your inbox, and finally a message area. The interface currently has minimal customisation other than minimising some of the component areas.

The following video from the Google Wave team shows how a wave is started and highlights the benefits of a ‘hosted conversation’, having one message which everyone can edit in real-time.

By hosting a single conversation on a central server it makes it very easy for additionally functionality to be incorporated by using robots and gadgets. Robots are pieces of code which can interact in the wave. They have the same level of control as a human participant, responding in real-time. Google Wave has a number of build in robots which include things like spell checking or even detecting web links or video resources (here is an example of spell correction).

When Google were developing Wave they wanted to make sure 3rd party developers had access to as much of the robot functionality as possible. They achieved this by providing developers with an API ( – an API is a set of commands which allows communication between separate programmes). An example of the power of robots is Google’s translation bot Rosy:

As well as robots the functionality of Wave can be extended using ‘gadgets’. Gadgets allow users to share interactions with objects like maps, whiteboards or even games like chess or Sudoku. The following clip shows some gadgets in action:

Even though Wave has only been available to developers since the end of May there are already a wealth of 3rd party robots and gadgets anyone can add to their wave (here is the most extensive list I’ve seen of robots). To see just how extendible wave is here are some examples of robots and gadgets which might be of interest to educators:

So far the videos above have showed you how the functionality of Wave can be extended using robots and gadgets. Another aspect of Wave which supports its use in education is the ability to embed waves into other sites. Already on this blog I’ve shown examples of embedding waves in Blackboard and Moodle (See Black Wave: Embedding Google Wave into Blackboard and Moodle Wave: Embedding Google Wave into Moodle). Embedding waves not only allows users to see the discussion but they can also still interact and add content as if they were using the full wave client.

Why do I think embedding is an important feature? Firstly, I see Wave technology as a very easy way to add additional functionality to your VLE. Even just using a basic wave you immediately have a way to support real-time interaction, but more importantly this environment can be enriched very easily by extending its use with robots and gadgets. Secondly, utilising Wave potentially adds choice. Students can choose to participate in a wave embedded in the VLE, or the same wave in their Wave inbox, or even the same wave potentially embedded on their Facebook site. Personalisation is a powerful tool to facilitate engagement. 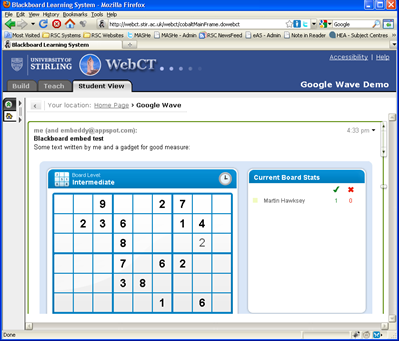 One of the issues when promoting 3rd party web services is the lack of control over backup, security or access. Understandable Quality Offices get particularly nervous if summative assessment is involved. As part  of the Wave project Google are developing an open protocol which will allow any institution to host their own Wave server. This puts control back in the hands of the institution.

Also just as email systems can send messages to different servers, the protocol will allow different Wave servers to communicate with each other allowing real-time collaboration across institutions. As I’ve already highlighted in a previous post you can already install a prototype server although its functionality is very limited, but achievable using open source applications.

Wave as a platform?
The ability to host your own Wave server opens an intriguing question. Could you use Wave technology as a web application platform? If the Ning’s or Facebook’s of this world were developing a social networking platform would it not make sense to build it on Wave technology?  You could wrap the site in an entirely different interface, using more traditional web building blogs for the majority of the site, incorporating wavelets to achieve different functionality. So for example when a user registers for the site a number of waves would be automatically generated and embedded within the page (status update, photo album etc.). The advantage is not only could these elements be embedded else where but the same real-time interaction would also still be available. Also not forgetting the wide range of robots and gadgets which could also be incorporated. So is Google Wave going to be the Apache server for the 21st century?

This all presents some quite promising opportunities for Google Wave, but there are a number of issues to be resolved. Before I highlight some of these it is worth reiterating that Google Wave is still in development.

Internet Explorer/Backwards Compatibility – Possibly one of the biggest sticking points is the lack of support for IE8 and an unclear roadmap for IE9. Microsoft’s stance is as the latest version of HTML hasn’t been finalised they are not going to incorporate any of its features into the next version of their browser. Rather worryingly Microsoft have a track record of being slow to take up standards and when they do don’t have full compatibility.

There is a workaround using Google’s Chrome Frame for Internet Explorer, but I can see many IT services staff who would be reluctant to install this on the campus desktop. There is also a wider issue of Wave not being compatible with older versions of browsers but I would argue keeping your browser up-to-date closes security holes.

Security/authentication – This applies more to institutions planning on hosting their own Wave server. The Wave protocol only extends to the real-time communication architecture and doesn’t include the authentication of users. As Wave is an extension of the XMPP protocol there will be solutions to draw inspiration on. SURFnet have also prepared a report on Wave which covers authentication.

Permissions – The  level of permissions when authoring waves is very flat in that anyone added to a wave has the same permissions as the author. This means they can add additional people to a wave including making it public. Removing contacts from a wave also hasn’t been implemented yet.

General access – With Wave being only accessible to 100k+ users it going to be sometime before we see if the technology is going to survive the big bad world. Some development to be aware of are: Wave will almost definitely become part of the Google Apps Suite (a separate preview program has already been launched); and some big names including Novel and SAP are already developing applications using Wave technology.

The power of waves

One of the common discussions around Google Wave, particularly when considering when looking at the impact on education, is the debate “Wave versus {a VLE}”. I don’t see Wave as a replacement for the VLE but a platform which can be integrated into it to enhance its functionality. The metaphor I’ve used is ‘constructive interference’ – the scientific effect of combining waves of the same frequency resulting in amplification. To achieve this effect the waves have to be in harmony  otherwise instead of amplification the output can be cancelled out.

Whilst there are still a number of issues to be ironed out with Wave I think there is enough there to make institutions seriously look and start planning for the future. The very fact that a number of large corporations have been looking at how Wave can be used to support their business processes is an indication that the technology might be taking its first tentative steps towards becoming an industry standard.