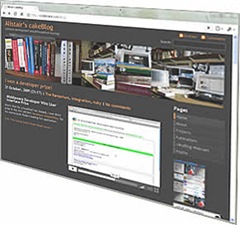 Alistair Young, Senior Software Developer at UHI, has won a prize in JISC MOSAIC Developer Competition. The competition, which attracted international attention, was established to investigate how user data can be used. Balviar Notay from the JISC Environment Team said, “the MOSAIC project is investigating the possibilities for data covering user activity such as book circulation across UK Higher Education libraries. In summer 2009, the project ran the Developer Competition to see what applications might be imagined and built on such data, looking for innovative approaches in terms of applications, query and display interfaces. Entries were required to use data released under Creative Commons licence by the University of Huddersfield, containing circulation records linked to the course affiliations of the borrowers.”

Alistair’s entry called the ‘iLib, the Course Book Finder’ uses different searches to find relevant books relating to a specific course. The application also allows users to add books to their personal reading list which can be shared with others. The application including a video summary is explained in Alistair’s cakeBlog.

The applications will also be featured at the concluding MOSAIC event at the University of Wolverhampton on Wednesday 18 November, which will inform the project recommendations to JISC and to the SCONUL Shared Services project on the opportunities relating to activity data and recommendation services that might be pursued within the sector. More information on JISC MOSAIC including event details is available here.