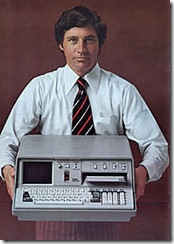 Did you own a IBM 5100 Portable Computer? If so you’re probably still suffering back pains from lugging the 25kg “compact problem-solving aid for engineers, statisticians, scientists and financial and business analysts”. The 5100 included an integrated 1024 character display and 16K of memory (upgradable to 64K). If you were one of the few who forked out the $20,000 price tag I’m sure you’re getting misty eyed over the “100 often-used analytical routines in mathematical, statistical and financial calculations” included with the 5100.
If you would like to reminisce over some more computing firsts including the first computer mouse which is celebrating its 40th birthday, or the first hard disk drive, head over to Royal Pingdom who have put together The history of PC hardware, in pictures