I was delighted to be able to speak recently at the Edinburgh Mobile Dev Meetup about Google Apps Script. Thanks to Product Forge there’s a recording of my session on YouTube and you can also get my slides as Google Slides or from Slideshare. The start of this talk is my usual Google Apps Script introduction [another room of devs who have never heard of Google Apps Script :(], but went on to give some mobile specific signposts like Android Add-ons and Execution API.

As part of the talk I developed a quick demonstration app built entirely with Google Apps Script. The app has a mobile friendly web form that collects some data and allows the user to capture a photo. The use case would be something like an engineer inspecting and recording data on a site visit and some certification of the visit being sent to the client. You could probably manage this with existing features in G Suite with Google Forms and existing Add-ons like Form Publisher but I was keen to show how little code was actually needed to do this. The demo app pulls together five features: 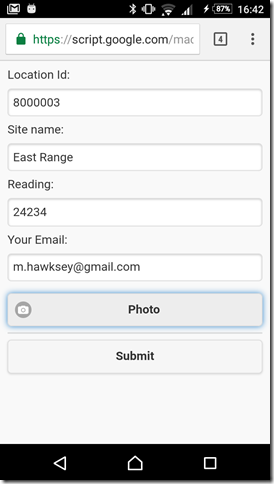 When the form is submitted a .pdf including the photo and submitted details is emailed and the Google Sheet updates with the info (an example .pdf is here): 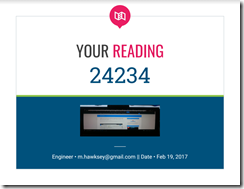 You can reuse the code by File > Make a copy of this Script Project. I’ve also pulled out some highlights below:

Server Side: Getting the user’s email

Server Side: Adding a file from a form to Google Drive

Server Side: Writing data to a Google Sheet

Server Side: Getting Slides as PDF and emailing as attachment

Server Side: Filling in a Google Slide template

I’ve commented in the source code where this happens. I’ve a previous post on Using the Google Slides API with Google Apps Script which goes into this bit in more detail.

And that’s all you need. Big thank you to David Sturrock for inviting me along, those who listened and the comments/questions at the end.

Previous Post: Join us to find out about analytics in Google Add-ons and the new Google App Maker 16 Dec @ 3pm GMT
Next Post: Running a Google Apps Script every quarter or x months