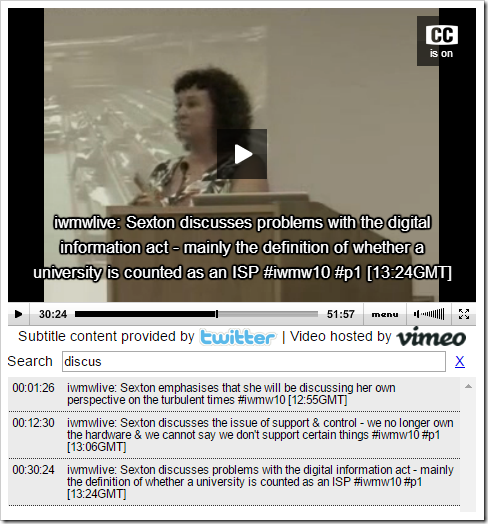 This is a repost of a guest post I wrote for the Institutional Web Management Workshop (IWMW) event. Original post is here and thanks to Brian Kelly for edits.

The first IWMW I remember was 2008 not that I was there but as I’d just taken up a role as e-Learning Advisor at the Jisc RSC Scotland North & East I was interested in events going on in the region. Even though I was not there the ripples from the event resonated with me and shortly after the event inspired by the ‘Use of Twitter to Support IWMW events‘ I took a sideways look at how Twitter could be used as a free SMS message broadcast system. Somehow IWMW 2009 passed me by but I made up for this in 2010.

Even before IWMW 2010 kicked off an exchange on Twitter between Brian Kelly and Tony Hirst about archiving tweets got my grey cells going. Brian was manually collecting #iwmw10 tweets which made me think something automated in Google Sheets would be a better solution. I didn’t know at the time but 6 years that project continues to evolve. I wasn’t actually at IWMW 2010 but watched and tweeted as a #remote participant and even though not there was able to make some connections. More importantly for me 2010 was an opportunity to test out one of my new toys ‘Twitter Subtitling‘. This combined recorded video with an archive of the Twitter backchannel. This solution relied on the TwapperKeeper service to access tweets from the event, which was subsequently sold and shutdown, but before it disappeared I cached the data meaning you can still watch these in their full glory. The interest in this the Twitter captioned version of IWMW 2010 led to some new features, the event inspiring beyond its end date.

[Notethe image at the top of this post, taken from the IWMW 2010 abstract for Chris Sexton’s talk, illustrates use of iTitle: tweets containing ‘#iwmw10’ are synchronised with the video recording of plenary talks. A search interface provides direct access to appropriate portion of the video stream; for example I this example, when a participant mentioned how they ‘were ‘inspired’].

In 2011 I was again a remote participant to IWMW. Even as a remote the event was still able to inspire and following a session by Nicola Osborne on Listen, Repeat, Learn: How to use Social Media Conversations to Measure and Demonstrate Impact and Improve Engagement I posted a solution for Google Spreadsheets as a lean mean social bookmark/share counting machine.

For IWMW 2012 at the University of Edinburgh not only was I able to attend but also present with Tony Hirst on a data visualization session and workshop. As I noted at the time whilst living locally family commitments meant I missed out on the social programme instead opting to ‘get drunk on data’. This included some quick data hacks including data Craig Russell presented on UK University Social Media accounts. In terms of more long term developments I put together an example of using the Google Visualisation API to make an easy filter on tweets collected in a Google Sheet, a feature that lives on today.

My last IWMW was 2014 were I was reflecting on some of the work I’d done with the Association for Learning Technology on connected courses. I was also back with a Google Analytics workshop which led on from the work I presented in 2013.

So we come to 2016 where I scheduled to talk again. I’m back talking about Google Analytics in particular how Google Analytics can be used as a part of ‘The Internet of Things’. In my head I’ve got a number of cool Google Analytics hacks to show off designed to get the audience to think beyond page views, now it’s just a case of making the demos…