I’ve previously demonstrated how you can extract Canvas discussions for analysis with NodeXL, and if you are interested in Learning Analytics that post is a better starting point. As Google Analytics is an advanced bean counter there is a limit to the data you can send and analyse. An important limitation to highlight at the very beginning is that:

The Analytics terms of service, which all Analytics customers must adhere to, prohibits sending personally identifiable information (PII) to Analytics (such as names, social security numbers, email addresses, or any similar data)

In this example we are going to extract very basic measures from the discussion data sending word and question mark counts to illustrate a general method. I make no claim in being an expert in discourse analysis and look forward to see if others can take this idea forward. Before going any further I should also highlight the Canvas API usage policy particularly around privacy. My advice if you are going to apply this technique on your own Canvas course is make it clear to students that data (beyond the usual Canvas reporting) will be collected with an option to opt-out (I’ve not done this in my example but feel it’s inline with the spirit of the source data and only used as proof of concept).

In more technical terms what we are doing is running a script every 15 minutes which calls the Canvas Discussion Topics API, looks for new messages since it last run and if there are any processes them to extract some counts before sending to Google Analytics in a batch. To do this I’m using Google Apps Script which is a free cloud based coding environment that lives in Google Drive. If you haven’t come across Google Apps Script before it uses a JavaScript syntax so it’ll look familiar to most developers and is supercharged with a long list of built in services. If you’d like a peak at the completed project the code is here and you can File > Make a copy to setup/run the code.

The Analytics Measurement Protocol is simple to use and only requires sending your required parameters as a payload to a url endpoint. Here are the required values for all hits to the measurement protocol:

In the Measurement Protocol Parameter Reference you can find some optional extras, in particular we are going to use qt which is ‘Queue Time‘:

Used to collect offline / latent hits. The value represents the time delta (in milliseconds) between when the hit being reported occurred and the time the hit was sent. The value must be greater than or equal to 0. Values greater than four hours may lead to hits not being processed.

This means that while our script is only running every 15 minutes we can use the timestamp on the discussion thread to create an offset so the true time is recorded in Google Analytics. As we are running the script every 15 minutes and Google Apps Script has quotas for the server time a script can run (from 1 hour/day) and number of urls it can hit (from 20,000/day), it makes sense to batch multiple hits in a single request.

The bulk of the code in this example handles interacting with the Canvas API. When the script finds new messages it calls buildQueryForGA() which builds our payload of parameters. In this example the data sent to Google Analytics is structured as follows (written as an object before being converted to a querystring):

From the above snippet you’ll notice it uses custom dimensions and metrics. If you haven’t set these up in Google Analytics before I’ll touch upon this later.

Rather than sending our payload it’s stored in an array with the extracted message timestamp using addToGABatch() (detailed below). When the script has 20 queries, or when called directly, processGABatch() appends the queue time to the query and sends the data to Google Analytics.

As I was using discussion data from a course in 2013 I’ve included a time warp to allow the playback of the conversation into Google Analytics. Running this on the LAK13 course (https://learn.canvas.net/courses/33) the out-of-the-box event reporting gives and overview of popular threads and the number of posts over time. 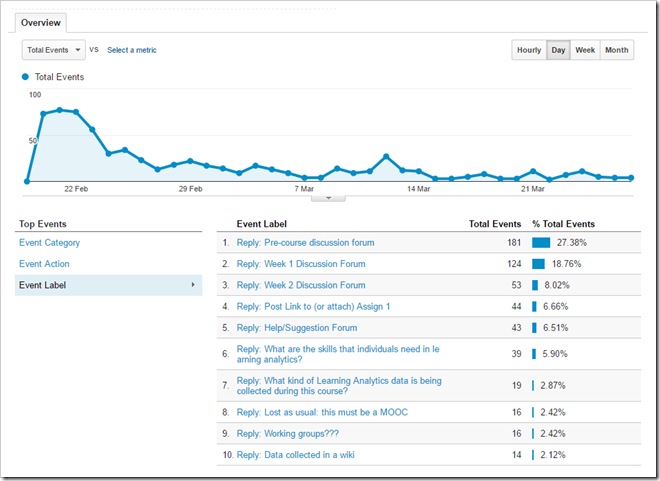 Where it perhaps gets even more interesting is around Custom Reports using the custom dimensions and metrics. For example, the screenshot below incorporates counts for thread replies, words and question marks but you could use your own. 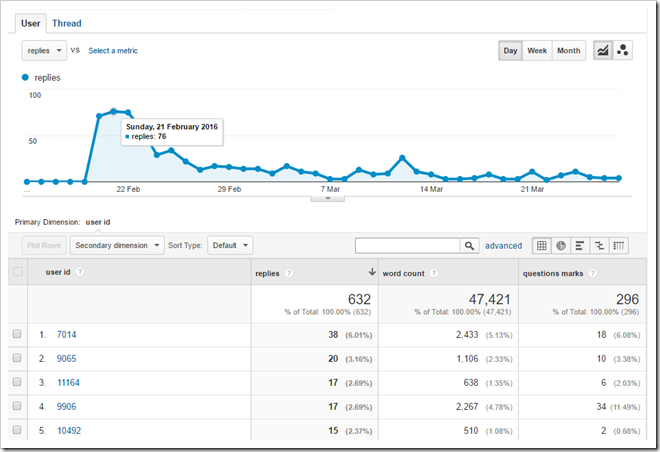 If you are not familiar with setting up custom reports, metrics and dimensions two Google Analytics support articles are:

There is clearly more work to be done with this concept but hopefully you can see the opportunities of using Google Analytics as an analysis engine for data from third party APIs … remembering of course to follow the usage policies of both Google Analytics and those other APIs. If you miss the link here is all the source code for this project (open the link and File > Make a copy to tweak your own).

Previous Post: Don’t think about how you can ‘badge’ a course, think about the assessment design and what you want to achieve
Next Post: Open isn’t free: What are the costs (hidden economies)