I was building an analytics dashboard today that collected data from various services including Google Anaytics and YouTube. Apps Script makes this very easy as highlighted in my previous post. An issue I encountered when I tried to access our YouTube channel reports is even though my account is attached to as a manager I was getting a ‘Forbidden’ error.  Turning to the Channel Reports documentation I discovered:

As our YouTube channel is associated with our Google+ page you can’t log in to Google Drive with that account. I did notice however that when I added YouTube Analytics as an Advanced Apps Script service the authentication prompt gave an option of authenticating using our Google+ page. 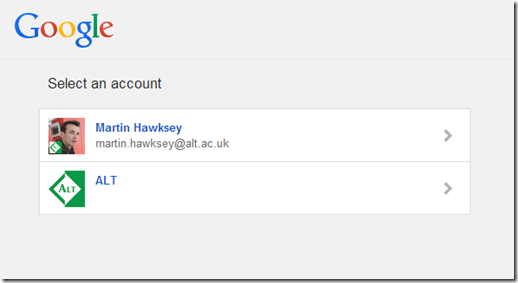 The issue then is if you authenticate against the Google+ page you can’t get access to other services like Google Analytics. I thought of a couple of ways I might tackle this such as writing a separate Apps Script project that just got the YouTube Analytics data and wrote it to the spreadsheet I was working on. I’m not entirely sure how the permissions would work out on that. Instead my solution was to expose the YouTubeAnalytics.Reports.query  in a separate Apps Script published as a web app. Setting this to run ‘anyone, even anonymously’ I could then use UrlFetchApp to get the data in my main script.

Here’s how I set it up. Below (or in this gist) the ‘main’ script is handling all the data read/write to sheet and a separate ‘proxy’ Apps Script project running the YouTube Analytics data collection.

Note: This technique exposes our YouTube Channel report to the world (barring security by obscurity). The method we are exposing is read only so we don’t have to worry about an injection.

Feels a bit hacky but can you see a better way of doing this?

Update 22/07/2014: Matias Molinas had the great suggestion of writing the results to a sheet which would avoid exposing your data. Jarom McDonald has also suggested using Google App Engine would give security and scalability à la superProxy

Previous Post: Automatically updating a Google Sheet with data from Google Analytics for regular reporting
Next Post: Moving WordPress to https and keeping your feeds alive for Feedburner (avoiding 400 error)