One of the uses of Twitter that caught the edtech community’s imagination early was the backchannel used for audience conversation, broadcast / amplification or just tweckling. As a presenter there are various ways you can use the backchannel such as directing discussion and highlighting example responses or monitoring on a second screen. When I’ve presented in the past I’ve struggled to check the backchannel whilst speaking but will try to weave video clips into my presentation as an opportunity to take stock.

An idea I’m keen to try for my next presentation is listening to the backchannel. Similar to the idea of TV presenters receiving directions from the production crew this might be a way to shape what you are saying based on what is being said at or about you. There are a couple of ways you could do this but the method I’ve found easiest to do is using Twitter SMS alerts and a ‘read aloud’ SMS notifier on my phone. 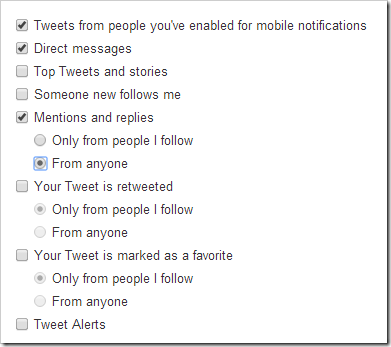 Twitter SMS messaging was something I wrote about in 2008 and essentially it’s the same concept, using mobile SMS notification. There are some limitations such as the Twitter supported mobile carriers and what you can be notified about. Since SMS notifications are not possible from search results you would have to reply on either tweets that mention you and/or people you’ve selectively enabled mobile notifications from. You could set this up in a number of ways. For example, you might ask a colleague in the audience and/or remote to give you feedback as you present.

The last step is to hear the message. I played around with a couple of Android Apps to do this and the best one I found was Talking SMS and Caller ID by Bit Studio Ltd (£1.50). This has a very small file size and unlike other apps which needed the phone to be awake to work Talking SMS happily runs in the background while your phone is in standby. I should say I tried using Android’s TalkBack accessibility settings but couldn’t find a way for it to automatically read the entire message.

So the next time you see me present and I’ve got a headphone in one ear and a confused face you’ll know why. So do you think it’ll work? Will you be trying this recipe yourself? s this easier to setup on iPhone?