Last week I was at the MOOC Research Initiative Conference in Texas. The organisers (George Siemens, Amy Collier, Tanya Joosten and others) should stand up and take a bow for a fantastic event. I’m still digesting my thoughts from the event which was full of extremes and at times completely surreal. I leave Arlington with memories of going from being baked at 28C to –10C icestorms; memories of trekking down the freeway with some of the best minds in EdTech trying to make it back to our hotel, spending time with people I’ve long respected including a couple of hours in the company of Martin Weller and Jim Groom the result of which was:

In case any of you were worried about education being broken, @jimgroom, @mhawksey & I fixed it in a 3 hour bar session in Dallas


At the end of that session Reverend Jim slightly disturbed both of us with a faith card he found on top of the ATM which became a handy prop when all around me were having their flights out of Dallas cancelled:

For the conference itself I decided to throw myself into the data strand. This ended up being very unnerving with some very intellectual people outlined various forms of data munging and statistical interpretation (Martin W. has expressed concerns with these extremist approaches). How would this crowd take to my very basic 1+1=2 presentation? As it happens very few decided to come along so I was never quizzed about my R2 or p and fortunately those who did were there were knowledgably about my area of interest and appeared to be appreciative of the work.

This is perhaps my disappointment from the event. That many are still focused on closed platforms for learning. When will people start realizing that the world isn’t a lab experiment and there’s a rich world of interaction and learning going on outside the LMS?

When did scaling the LMS become the next frontier of innovation? Jim Groom, 2012

At the end of the day though this comes back to beliefs. There were many at #mri13 who believed in ‘the platform’. Are they worshiping a false idol or is it me? 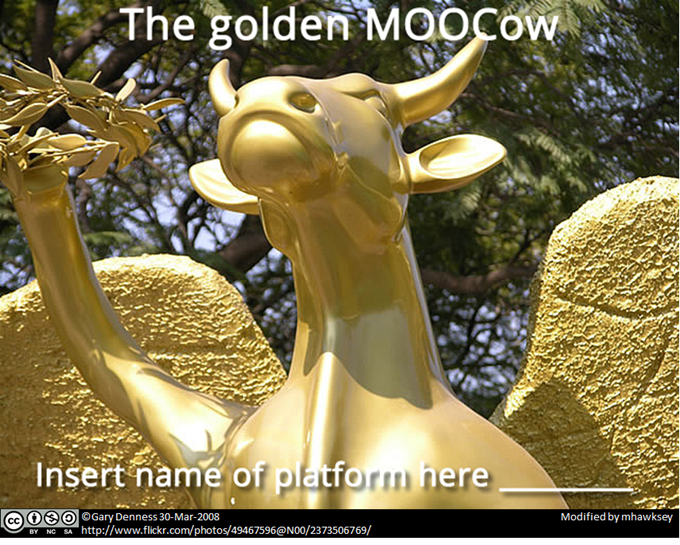