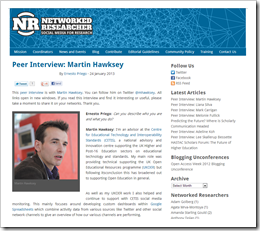 I was recently asked by Ernesto Priego if I’d like to do an interview for Networked Researcher. I’ve been an admirer of Ernesto’s work (I can even tell you the day I became aware of him 22nd September 2011. He was tweeting from the #studentexp event organised by @GdnHigherEd. If you’d like to see what he said it’s always been the default graph on TAGSExplorer ;), so it was an honour to be asked.

I inhabit a weird world where I no longer know what I do is classified as so I’m not sure I’d call myself a researcher in a traditional sense, but it was great to have the opportunity to share what I do and acknowledge some of the people who have influenced/inspired me along the way.

Previous Post: Registering blog addresses and generating a OPML file (Notes on FeedWordPress and MOOC-In-a-Box)
Next Post: What I’ve starred this month: January 28, 2013