A retweet yesterday by Amber Thomas (@ambrouk) of Anna Armstrong (@frenchdisko) alerted me to a feature of Google Docs I wasn’t aware of, that the Insert Image Search automatically filters for Creative Commons released pictures:

Google Docs and Creative Commons images: Did you know… In a Google Doc, if you insert a picture using a Google… bit.ly/JKnSB9 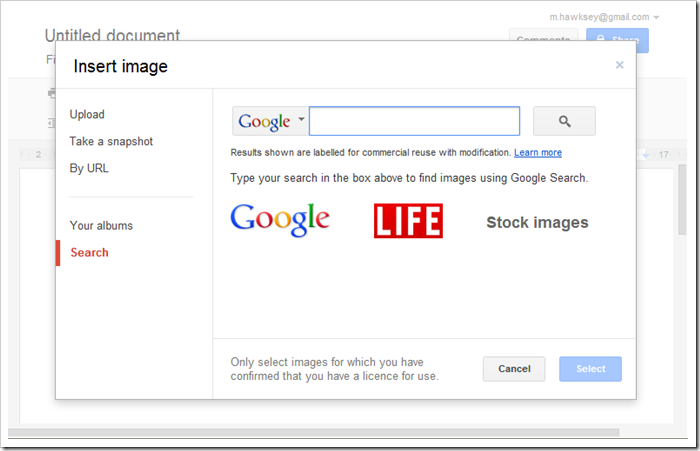 Fantastic I thought. A way for staff to create open resources with millions of pictures to choose from and reuse with no more effort than if they were inserting any other image. Such a feature obviously doesn’t come without it’s health warnings. Clicking on ‘Learn more’ we can see:

Before reusing content that you’ve found, you should verify that its licence is legitimate and check the exact terms of reuse stated in the licence. For example, most licences require that you give credit to the image creator when reusing an image. Google has no way of knowing whether the licence is legitimate, so we aren’t making any representation that the content is actually lawfully licensed.

I can appreciate that Google’s search technology isn’t going to be 100% reliable in detecting which license is being used in an existing work, but wouldn’t it be great if when you inserted the image Google also gave their ‘best guess’ of the license for you to check and edit if necessary. 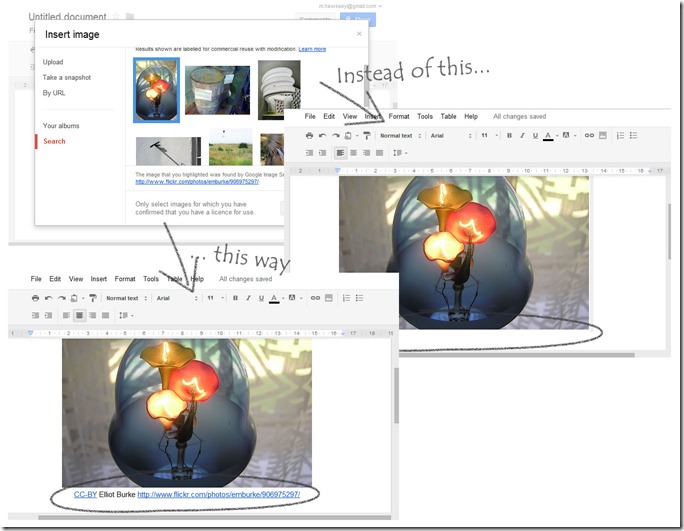 Or am I just being naïve about this whole thing?

PS I don’t know if something has gone horrible wrong with Google image indexing, but when in Insert Image Search I enter ‘lightbulb site:.flickr.com’ the thumbnails don’t always match the actual image.