a full-fledged repository with complete history and full revision tracking capabilities, not dependent on network access or a central server

That quote is taken from the Wikipedia entry for Git (software), the full quote is:

In software development, Git (/ɡɪt/) is a distributed revision control and source code management (SCM) system with an emphasis on speed.[4] Git was initially designed and developed by Linus Torvalds for Linux kernel development. Every Git working directory is a full-fledged repository with complete history and full revision tracking capabilities, not dependent on network access or a central server. … Git supports rapid branching and merging, and includes specific tools for visualizing and navigating a non-linear development history. A core assumption in Git is that a change will be merged more often than it is written, as it is passed around various reviewers.

The idea of using Git as a platform in open educational development (not just as a software development tool) is something that has pinged my radar a couple of times this year so I thought I’d quickly* share some interesting links material in this area. The core concept when reading this is the idea that Git repositories are:

*I’m not entirely happy with how this post is written but don’t want to spend too much time on it – consider it as some very rough notes.

As it happens to order in which I came across these links also fits in with an evolution of the idea from software to educational support tool. The first example is still more at the software end, in this case the use of the GitHub Service by Joss Winn at the University of Lincoln as a place for Open bid writing, but it helps highlight the potential benefits of Git. 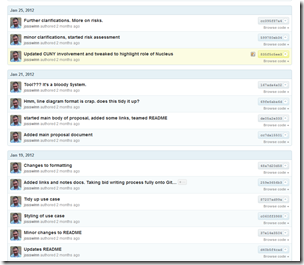 In ‘Open Bid writing’ Joss reflects on the use of GitHub to develop his proposal for, the now funded, JISC OER Rapid Innovation Bebop project. The main advantages highlighted in the post are as this was proposed as a software development project the final code and proposal will all sit in one place. Now you might say how is this different from just uploading your project plan to your project site. The difference here is just as GIt allows you to navigated different versions of the code you can also see how the proposal evolved, see different versions of the proposal and how it was constructed and even how ideas evolved. Joss also points out that using GitHub during the writing process also gave the opportunity for others to learn or even contribute to the proposal.

The final aspect not included in the post but mentioned by Joss is a tweet before submitting the proposal is Git’s functionality for someone else to fork the project, that is take a snapshot of the proposal and develop it in a completely different direction. So at a later date you might see an opportunity to do something similar to Bebop and instead of starting from scratch use Lincoln’s proposal as the basis of your own work.

[In Joss’ post he also that one of the student projects at DevXS was to create a GitHub hosted version of the collaborative writing tool Etherpad which stores documents in Github. You can read more about RevisionHub here and the code developed at DevXS is here].

Not code, but poetry

‘Code is poetry’ is the WordPress motto but as Phil Beauvoir (JISC CETIS) highlights in his post Forking Hell? Git, GitHub, and the Rise of Social Coding already people are using Git repositories for other purposes beyond coding. These include writers, musicians and artists all putting there material in Git for others to contribute or fork to make something different. My favourite example from Phil’s post is:

Durham-based band, the Bristol 7’s, last year released their album, “The Narwhalingus EP” on GitHub under a Creative Commons licence “to see what the world could do with it”. The release, if we can call it that, comprises the final mixes and the individual tracks as MP3 files. The band invites everyone to:

“Fork the repo, sing some harmony, steal my guitar solo, or add a Trance beat. Whatever you want to do, just tell us about it, so we can hear what’s become of our baby!”

[Sticking very loosely with art I see via Ed Summers cc0 and git for data post that:]

So far the examples I’ve highlighted have all used the GitHub service. Earlier in the week I had a chance to chat to Joss Winn at the JISC OER Rapid Innovation start-up meeting and started talking about Git. One of the things Joss mentioned was whilst Git presented a number of opportunities for academics to contribute, share and reuse material the terms and concepts of Git are foreign to the average academic. A post I had read but not fully processed is Brian Croxall’s Forking Your Syllabus. In this post Brian highlights that for new teachers it can be daunting to design a programme of learning and that “when you’re beginning to plan something new, you can always benefit from seeing what others before you have done”

Brian goes on to join the dots between syllabus creation and Git, the final picture coming together with Audrey Watters ClassConnect: “GitHub” for Class Lessons. My hunch is ClassConnect has a Git backend and while the icon set and functionality is ‘fork’ the language is ‘used’.

As Audrey points out ClassConnect is a new product and I don’t think all of the required features are there yet, like selecting and searching by Creative Commons license, but the idea of using the Git model in educational development is one to watch.

But that’s what I think. What do you think? Are the soft issues of getting people to work in a more open way always going to overshadow any technical development to make it easier to do this? Or will tools like ClassConnect suck people into different working practices? Will staff ‘git’ it?

Update: There’s been some more discussion on this idea on the OER-DISCUSS JISCMail list