When I initially pushed TAGSExplorer to the world one of the first reactions I got was from my friend Tony Hirst who suggested having a simple version which let users select two columns to generate a force layout diagram (that’s what I think he was suggesting anyway ;).

I’ve played around with other ways to get online network (force layout) visualisations from tools like NodeXL and Gephi, but these need a high level of faff. To take an edge list (here’s an example of edge data), upload it to Google Spreadsheets and then point a browser window it makes the process a lot easier.

So stripping out some of the extra code from TAGSExplorer gives: 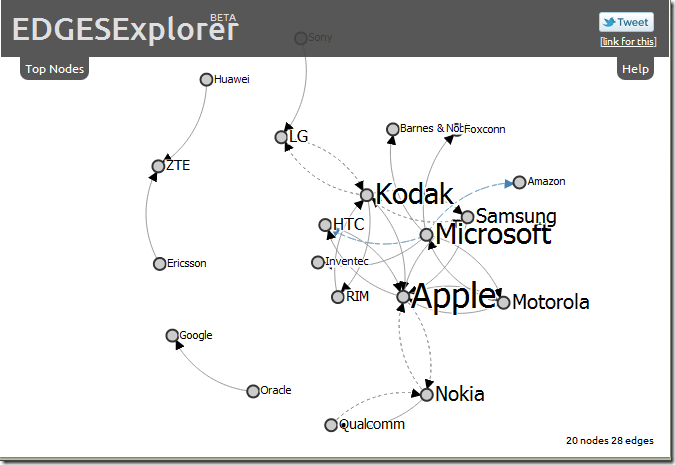 How to use it

You can specify a 3rd column with link styles for each of your edge rows. The default is solid but there are two more options ‘dashed’ and ‘dashedblue’

Like TAGSExplorer the data used for your diagram is queryable so you can refine what you see.

Something for TAGS users

If you are using a more recent version of my Twitter Archiving Google Spreadsheet (TAGS), v2.3 or greater, you can generate an edge list for follow/followee relationships from the Summary sheet data. To do this create a sheet called ‘Edges’ then run Twitter > Get Protovis. Here’s an example from the #devxs tweets I captured

(note the relationships are generated from the Google Social Graph API so aren’t 100% accurate. The code for this is based on Tony Hirst’s Friendviz)

BTW I had a query about whether the code for this is open-source and for the processing/generating d3.js svg area the answer is yes (I feel the html and css parts include too much from yohman’s Twitter Smash so I’m asking for approval first).

PS I now have a nagging voice in my head to turn EDGESExplorer into a Google Gadget as a replacement to the protovis version. Anyone?