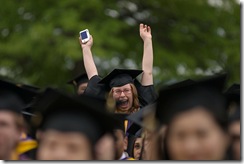 BBC News Scotland reported on recent UCAS figures showing that there has been rises in applications to Scottish universities. The biggest rise was reported in the over 25s with a 108% increase in applications. There were also rises in the 21-24 age group which was up by 58% and the under 20s which were up by almost 20%. Overall applications have increased by almost 32% since last year. Reasons for the rise include changes to the admission processes, the effects of the current economic situation and students reapplying having missed out on places last year.