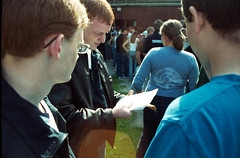 The Sunday Times reported recently that they had evidence that some Scottish universities had changed their admission procedures to ‘positively discriminate’ in favour of students from disadvantaged backgrounds. In particular the article highlights admission policies for the University of Edinburgh and St. Andrews University which would seem to favour students applying from poorly performing schools. For example at the University of Edinburgh some students from poorly performing schools can receive extra points to their UCAS Tarrif. Should we be concerned by this social engineering? Is the Funding Council aware that these practices are being carried?

I’ll start with the last question. Not only is the Scottish Funding Council aware that pupils form disadvantaged backgrounds are receiving additional attention by colleges and universities, they are proactively encouraging it through ‘optimal participation’. For a review of the Funding Councils actions to tackle this area the SFC Widening Participation Review Group published ‘Learning for All‘ in 2005.

Should we be concerned with this social engineering? First we should look how ‘fair’ the original system is. Entry into higher education is largely dictated one single factor, UCAS Tariff points. Is a student’s performance at school a reliable indicator of what they will achieve in higher education? The ‘Schooling effects on higher education achievement‘ report published by HEFCE concluded that grades achieved by a student was “the single most important factor in determining the expected HE achievement” however “the effect of school performance was inconsistent”. In particular, “students from independent schools appear to consistently do less well than students from other schools”. So if the system isn’t fair in the first place shouldn’t we try and fix it?

RELATED STORIES
Attack by Lord Patten as Oxford University launches £1.25bn appeal
Times Online – UK
The Government was attacked yesterday over its attempts to push deprived teenagers into higher education when the Chancellor of Oxford University said that …
See all stories on this topic