When I fly it generally becomes a session in staring into space and letting my mind wonder. It’s not that I haven’t got a long list of Google Apps Script ideas I want to explore, but as a ‘cloud’ based scripting environment a data connection is required (insert pun about in the clouds/above the clouds). For my latest trip I decided to set myself a challenge – create a watch face for Android Wear only using my mobile. This is a lot easier than it sounds thanks to the WatchMaker Watch Face app for Android. Here’s how I got on (or you can just download my watch face)

My watch face on the right displaying the time 9:42 and on the left TokyoFlash Twelve 5-9 B it was inspired by

WatchMaker is one of a number of apps that allows you to do WYSIWYG (what you see is what you get) editing. Making my own watch face was something I started thinking about at the weekend and I’d already scoped out WatchMaker, downloaded some other watch faces and had a peek under the hood. As part of this I discovered WatchMaker integrates with the Lau Programming Language making it possible to do some amazing stuff.

Another great feature of WatchMaker is reuse is baked in. Every watch face you import can be duplicated and customised. This liberal approach makes it easy to see how other people are using WatchMaker features.

As part of my weekend tinkering I’d already taken a picture of my well loved TokyoFlash Twelve 5-9 B watch, shown above. The 1259 B uses LEDs to light up a binary display of the time (see video here), hours shown on the left and minutes equalling the sum of the top (ones) and bottom (tens) rows.

I wasn’t planning on making a watch when I sat down on the plane, but just before the aircraft doors closed grabbed an image of a 1259 B with LEDs on. As I wanted to use a 1259 B LED in my watch the first challenge was cropping the image. I’ve limited image editing apps on my phone but discovered if I successively used the Snapseed cropping tool I could get down to a 16x16px image. 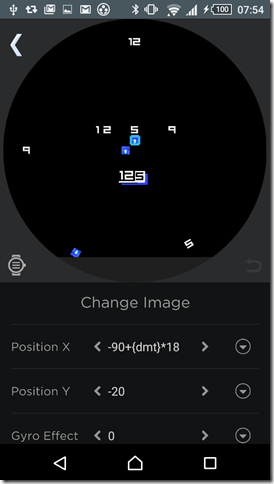 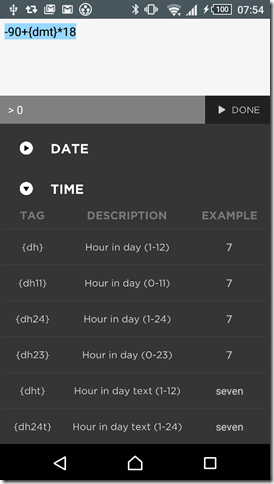 Adding an image to WatchMaker lets you position the image and appearance using a number of build in WatchMaker variables. For example, {dmo} returns the current minute in the hour in ones. So to progress a minutes led one step from left to right I set the x-position using –90+{dmo}*18. Rotating the hour LED around the bezel was a little more tricky and during the flight my basic trig. maths failed me but the cos/sin rule quickly came back to me once the aircraft doors opened.

There a lot more you can do in WatchMaker with sensor and external data and even animation effects and whilst my first foray in this area is basic it’s mine and my maker journey continues ;)