It’s been a while since I’ve had a chance to blog about a failed attempt to do something. Recently I was trying to get full screen access in Google Drive using Google Apps Script and I couldn’t get it to work resulting in this feature request (star to vote ;). In this post I want to share some of my thought processes and highlight why this would be a useful feature.

One of the nice features of Apps Script is access to custom dialogs and interfaces in Docs, Sheets and Forms. These can be generated using the HtmlService, which enables you to write very rich and interactive interfaces. Until very recently all the Html you created went through Google’s Caja Compilier. Caja created a lot of headaches for Apps Script developers striping and reformatting html tags and restricting what you could do. For example you could forget using SVG (scalable vector graphics) making it impossible to use well established visualisation libraries like D3.js.

However, in December the Google App Script team announced Speeding up HtmlService with the IFRAME sandbox mode. With this there is now the option to skip Caja sanitisation and a whole host of modern browser-based application deployment. For example here’s  Román Cortés 1kb Christmas Tree in Apps Script (I’ve tipped it over the 1k mark as it was throwing an error in Chrome. – the source code for this project is here). Huh turns out with blocks can’t be used anonymously, as script owner this works fine 🙁

The IFRAME mode should not be confused with the ability to use <iframe> to embed your published scripts. This isn’t currently possible for security reasons and there is an issue ticket for it.

My interest in using custom visualisations in Google Sheets stems back to 2011, my first attempt wrapping Protovis SVG graphs, the precursor to D3.js, as a Google Spreadsheet Gadget. Alas Spreadsheet Gadgets got deprecated in the ‘spring clean of 2012’. One of the big advantages of Spreadsheet Gadgets was you didn’t have to publish the data to be able to generate a visualisation, (a route I use for my TAGSExplorer tool). Unfortunately I don’t have a screen shot of how the Protovis Gadget rendered so you’ll have to make do with a later version which switched to D3.js: 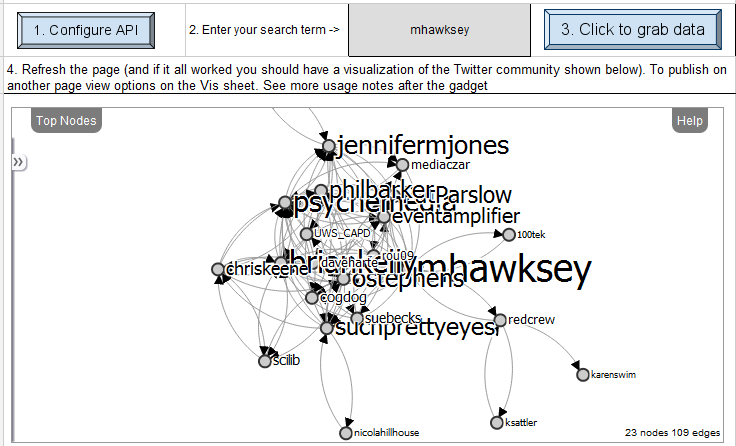 With the new IFRAME  mode there is an opportunity to re-explore how custom visualisations and analytical tools could be integrated in Sheets as well as Docs and Forms. Bruce Macpherson has already shown an example of D3.js in the Sheet sidebar:

With this we’ve come almost full-circle with the ability to create custom visualisations around data in Google Drive without the need to publish it. One limitation here is the amount of screen space you can play with. Sidebars are restricted to 300px wide. You can use dialog windows but these would have to be a fixed size and as far as I’m aware there are no browser detection methods for factor in the available screen size. But lets not forget that I’m predominately talking about scalable vector graphics here and most modern browsers now support the Fullscreen API (Fullscreen API spec). To see this in action embedded below is an iframe of this page, which if supported by your browser, will let you to pop it to fullscreen using the button (I’m just using a raster image to keep with the Xmas theme ;).

So using Apps Script we could have fixed size interfaces with the ability to stay in Docs, Sheets or Forms interface but pop to fullscreen … Well as you have probably already noticed from the post title nope. Here’s a Sheet where I’ve used the same full screen code in a custom dialog. Clicking the ‘Image Test’ link in the spreadsheet opens the dialog but while the fullscreen script runs nothing happens. Initially I thought it was something wrong with my code but trying a YouTube embed within a custom dialog resulted in now full screen option being included.