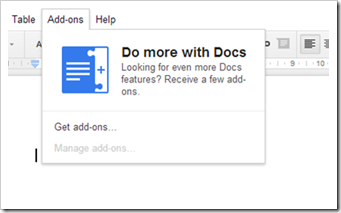 Google recently announced (11th March 2014) the release of add-ons for Google Docs and new Sheets. This opens the opportunity for third-party developers, big and small, to create custom functionality within these products. This isn’t entirely new as for many years developers have been able to use Google Apps Script, which is also at the heart of add-ons, to create and distribute custom Google Apps enhancements. What add-ons do create is an a streamlined user experience fronted with a Chrome Web Store like interface. This post provides some notes for Google Apps admins about Google Docs add-ons. You can see more of this in action in this video.

The announcement from Google marked the immediate availability of add-ons for Google users as well as Google Apps accounts on rapid release (more on Google Apps release process). For Google Apps accounts on ‘scheduled release’ add-ons will appear “on Tuesdays only, at least one week after the feature was released to the Rapid Release track” giving time for admins to make local arrangements such as training and support. When Google activated add-ons the default was to have them enabled.

The support for add-ons in Google Docs notes:

After you enable or disable Google Docs add-ons, it may take up to an hour before the change takes effect in previously opened documents, and the change won’t be seen until the documents are refreshed or reopened

The Admin console setting for add-ons controls both Docs and the new version of Sheets; there are not separate settings for each document type. (Add-ons are not available for other document types.)

Tip: If you are having trouble with an add-on in your document, you can force it to load without any add-ons by adding ?addon_free_mode=true

Google new Sheets are rolling out as the default

It’s worth noting that add-ons are only available for new Sheets. To support add-ons on the 21st March 2014 Google announced new Sheets are now the default, stating:

Over the next couple of weeks, rapid release domain users will automatically be upgraded to the new Sheets. Spreadsheets created after the upgrade will use the new version. Users may opt-out of this experience through the settings menu in Sheets.

The new Sheets will be available to Schedule release domains in the next four to six weeks.

Some Google Apps users have been already using new Sheets in their domain by creating a new Sheet with their Gmail account and sharing it with their Google Apps account, then using this as a template for all their spreadsheets. Users on domains on scheduled release will not see the add-ons menu even with a new Sheet. This will change as add-ons are rolled out and admins don’t enable add-ons to:

If you disable Docs add-ons in your organization, users will still see the add-ons menu in their documents and can browse the store, but they can’t install any add-ons from the store.

A concern I’ve seen raised is the control domain admins have in approving add-ons for use. Currently the switch provided by Google is all on or all off. The current safeguard against malicious add-ons is that these need approval from Google before publication. Already some of Google’s partners have released services for providing per add-on control and it’ll be interesting to see if Google bake this feature in.

Something else for Google Apps admins consider is support informing users about add-on authorization. One of the features of add-ons is the source code is not visible to the end-user. Where as on Google Apps Scripts installed from the Script Gallery or copied elsewhere the code could be viewed before run. Admittedly the majority of script end users wouldn’t be able to understand the code but there is a degree of transparency. This shifts focus on the authorization process which warns users about what the script can do. Historically given the range of service interaction available in Apps Script these messages have been very broad. For example running the following code in the script editor which only gets a document on your Google Drive: 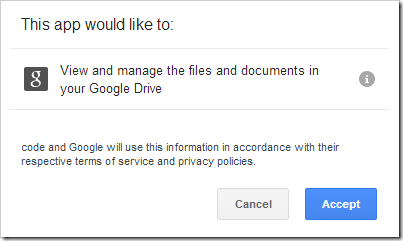 This problem isn’t unique and anyone installing apps on your phone will be presented with similar daunting messages. For me this partly comes down to digital literacy, educating users about how identify malicious programs by, such as, checking ratings/reviews and exploring the publisher websites, which are a requirement for add-on publication. For example, the Remove Blank Rows add-on support site highlights the authorisation requests used. Ultimately though better permissions scoping in add-ons would be useful.

If you are interested in developing your own add-ons Google have this introductory post with more information. You can also get support from Stackoverflow or this dedicated ‘developing add-ons’ Google+ Community.