For a long time I’ve been in awe of live bloggers like Nicola Osborne and Doug Clow and on several occasions benefitted from being able to point to the information they have captured in posts. This extends to events I’ve not been able to attend such as Doug’s extensive notes from LASI13. For our recent event, which ran as part of LASI-Local, I thought I’d give liveblogging a go. You can see the two posts I captured here and here. Overall I’m disappointed with the result but thought worth reflecting on the process and output. 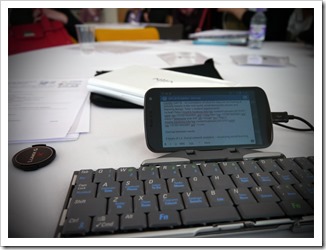 To start with the process my setup was an Android phone running the WordPress App connected to a bluetooth iGo keyboard. In the background of the picture you’ll see I’ve connected the phone to a Viliv S7 (yes I like my gadgets), which was used as a power source. The reason I opted to use my phone and not a laptop or tablet is the WordPress App lets you take pictures with the camera and insert them in the post as you type. To also save a bit of time prior to the event I drafted some posts with holders containing session title and presenter. I then republished the post regularly as I was editing. Technically this mostly worked well although for some reason I did loose the edits for one of the session speakers. Also after the event I noticed that the quality of pictures (mainly of slides) wasn’t that great and were a little washed out. Fortunately all the original pictures were still recorded on my phone so I could do some light post production cropping, sharpening and adjusting contrast.

The product. I probably didn’t choose the best two session topics to try live blogging. The session on ‘working with dialogue data’ was excellent but the complexities of machine learning, meta-discourse and rhetorical moves made my head hurt and I struggled processing what was said and converting to summarised text. In the afternoon there was another excellent sessions but as the topic was data visualisation capturing what was both said and shown was a heavy load. Where I probably went wrong was being distracted by taking pictures and not notes. Already a number of presenters have uploaded their slides so there is perhaps little benefit of my poorly framed pics.

One slight exception was the session given Em Bailey on ‘An overlooked tool? Using Excel for advanced data visualisation’. Rather than using a slidedeck Em demonstrated some of the work she’s been doing around NSS and KIS data in Excel. This was a masterclass in what was possible using Excel’s out-of-the-box chart tools hacked to within an inch of their lives to produce advanced interactive data visualisations. Below is a screen shot I took as part of my liveblog post which I’ve now cleaned up a bit and annotated. The liveblog post tries to capture some of the flow but again is light on what is being shown and doesn’t really do Em’s work justice and a post process has been required.

So I think I’ll be leaving the liveblogs to those who are more experienced. I am however interested in other techniques for capturing events I attend.