Following the opening keynote the next session I attended at Google I/O was Google+ Platform Basics. This session was a great opportunity to meet Ade Oshineye (Google+ Developer Advocate based in London). From Ade’s profile:

co-author of O’Reilly’s “Apprenticeship Patterns: Guidance for the aspiring software craftsman” and you can find out more about that book here: http://www.oshineye.com/books.html

I’m also part of the small team behind http://developerexperience.org/ which is an attempt to see if we can successfully apply the techniques of user experience professionals to products and tools for developers. We call it Developer Experience or #devexp for short.

Having followed Joss Winn’s work highlighting developer craftsmanship it was great to have an opportunity to steal a couple of minutes with Ade, in particular, I was keen to make him aware of the work Mahendra Mahey (UKOLN) is doing around DevCSI and Dev8D (Ade appeared keen to come along to the next Dev8D).

Back to the session, Ade and his colleague Julie Farago went through the various publisher options for Google+. These included the share, +1 and badges people can add to their own site to make it easier to get your content into other people’s streams. This was something I’ve previously looked at before, but wasn’t particularly impressed partly because when doing a Google Search for these types on buttons I get directed to Google Webmasters: Add +1 to your pages to help your site stand out, which isn’t great. A better starting point is the Google+ Platform Plugins page, which uses Developer Experience principles for customisation and options [Something I’ve only recently got my head around is why Google have +1 and share buttons given that both also open the same comment box. The answer is share is “for content that users may want to share but not +1 (e.g. news or controversial content)”].

It was interesting to hear Ade mention that the people at Google had noticed a number of people were using a more traditional html/javascript popup instead of the entirely script powered version of the Google+ Share button, so they included the code for this version as well.

A recent development mentioned in the session was Google +1 Recommendations (emphasis mine):

Working on +1, we often hear people say they want to see more of what their friends recommend. Likewise, when we talk to site owners, they ask us to help them show more relevant content to their users. Today, we are rolling out a new feature of the +1 button in platform preview: when users hover over a +1 button, they will see recommendations for other great content on your site. … To keep these recommendations more relevant and on-topic, they will always refer to pages on the same domain or subdomain as the +1 button. 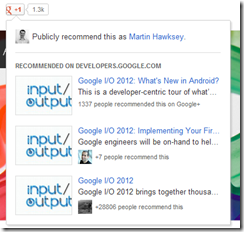 Because this new feature is limits recommendation to the same domain it’ll be interesting to see if this has any effect on internal site traffic and how relevant the suggestions are. Currently on the small sample I’ve tried it seems to be a mixture of the most popular (page with the most +1s) and the most popular within your circles … but I could be wrong.

The final thing from this session, which I wasn’t expecting, was schema.org and rich snippets got a mention. Phil Barker (JISC CETIS) has written more on Will using schema.org metadata improve my Google rank?. My impression is schema/rich snippets won’t necessarily improve your search rank, but the added information in the search listing and Google+ stream might make it more attractive for someone to click on.

The next session I attended was The Next Generation of Social is in a Hangout which focused on the Hangout API. More details of this and hopefully a practical example to follow.