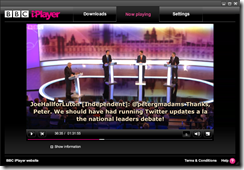 Since February my post on Twitter powered subtitles for BBC iPlayer has remained in my top 5 posts and I’ve been meaning to revisit the iPlayer platform with another twitter subtitle example. The general election ‘Leaders Debates’ seemed like an ideal event to experiment with the format. It became very apparent after the first debate that simply pulling the public timeline into the twitter subtitle generator wouldn’t work as with an average of ~30 tweets per second the public discussion would just be a blur.

With the increasing popularity of twitter (and other social platforms) to comment on live events there is probably a separate research strand looking at intelligent filters, instead I’ve gone for a more basic approach. Fortunately the good people at tweetminster.co.uk, who have been closely monitoring the election using twitter sentiment, were able to provide me with a data file of twitter comments made by MPs and party prospective parliamentary candidates being tracked on twitter during the debate. Using the Convert time stamped data to timed-text (XML) subtitle format using Google Spreadsheet Script I was able to generate a subtitle file compatible with BBC iPlayer. Below is a short demonstration of the twitter subtitles in action followed by instructions to see the entire debate.

So if you would like to see what some of the parliamentary candidates were tweeting during the last leaders’ debate follow these steps:

chevron_left Presentation: Twitter for in-class voting and more for ESTICT SIG
What I’ve starred this week: May 4, 2010 chevron_right