Pair programming is an agile software development technique in which two programmers work together at one work station. One types in code while the other reviews each line of code as it is typed in. The person typing is called the driver. The person reviewing the code is called the observer (or navigator). The two programmers switch roles frequently (possibly every 30 minutes or less). From Wikipedia

Regular followers of the twitter subtitle story will be aware that this idea has been bouncing back and forth between myself and Tony (here are some of his posts). While we don’t have a true ‘pair programming’ relationship the dynamic is very similar. So when Tony posted a method for deep search linking a twitter caption file using Yahoo Pipes it was time to hit the driving seat for some evening coding.
Using the other Martin’s presentation again I’ve put together this page which demonstrates twitter caption search and timecode jump (I should point out that limitations of the JWPlayer means jumps can only be made to portions of the video which have already been buffered). 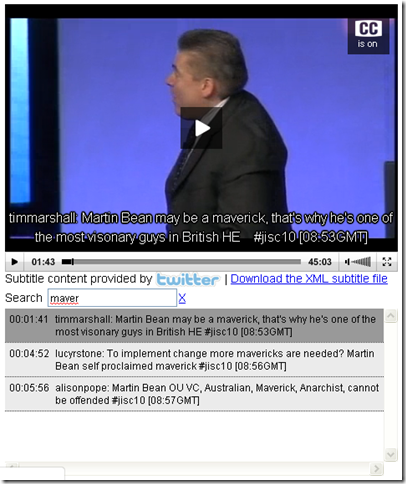 Taking the JWPlayer used in the previous post I dropped it onto a page also pasting the subtitles from the XML file. With a bit of CSS styling and using A K Chauhan’s JavaScript List Search using jQuery the pasted xml can be filtered, and using the JWPlayer JavaScript API you can jump to the related part of the video. When I get a chance I’ll integrate this functionality into the twitter subtitle generator. Update: Breaking my ‘no coding in office hours’ rule this feature in now enabled for the ‘YouTube with Tweets’ option of the twitter subtitle generator

Historically one of the issues with audio/video content is the ability to search and deep link to content. This is changing most notably with Google/YouTube’s auto captioning of videos, but as Tony pointed out in his last post there is still some ways to go. Providing a contextualised and searchable replay of the backchannel with what was actually said potentially opens up some interesting uses. With a number of universities exploring the use of lecture capture there is potentially an opportunity to enrich this resource with the backchannel discussion. In particular I’m thinking of the opportunity for students to learning vicariously through the experiences and dialogue of others. Before I go all misty eyed the reality check is twitter isn’t that widely used by students (yet), but surely this is a growth area.