One of the themes I expect to see for 2010 is more collaborative real-time interaction web applications. I’ve obviously written a lot about Google Wave, but there are a number of other web services which have offered and continue to offer the ability for users to have real-time interaction across the web. I want to highlight a couple of these which could be helpful in making web based learning more engaging. 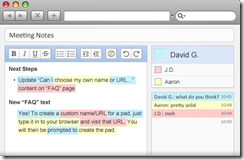 I was late in finding out about the (really) real-time collaborative text edit site etherpad.com and a couple of weeks after I did it was a bit of a blow to here it was going offline after being bought by Google. Fortunately Google decided ‘to do no evil’ and quickly announced that people could still use the site until March 31st 2010 and that the code for etherpad would be made open source.

The code for etherpad is now available for download and other users have already started hosting their own etherpad sites. This might be particularly appealing to institutions as they can take responsibility for logins, backups etc.

If you are interested in going down this route a couple of posts you might find useful are a very detailed installing etherpad guide and a discussion thread on ldap user authentication, which includes some patch code from one of the original etherpad developers Elliot Kroo (just to say it is fantastic that etherpad are helping other developers use their code).

Mindmeister is an online collaborative mind mapping tool. The interface is very easy to use. Like mainly other web services it uses a ‘freeium’ model so the downside is that students will only be able to have 3 mind maps on the go at one time (but these can be exported as image, PDF or RTF). Below is a great video by Thomas N. Burg which highlights mindmeister’s basic functionality (nodes which flash red have been created by a co-collaborator).

Cacoo looks like it would be a great tool for computing students with ready made icons for networks, office equipment and design wireframes (and UML if that is your thing), the site may also have wider appeal with more generic shapes. As well as enabling real-time collaboration Cacoo also has some very useful other features like snap-align and connecting shapes together. The video below has a nice overview:

The web has a reputation of being a dynamic environment but when you think about it most of the time you are looking at static pages. It’s only when you hit the refresh button that new content appears. There are obvious exceptions such as desktop video conferencing but even supposedly synchronous tools like instant messaging only update when the return key is hit. Learner isolation is potentially a factor in terms of retention and motivation and the real time web could be a useful tool in combating these issues.