[flickr]photo:144373335[/flickr]I’ve finally got around to reading a couple of reports which have been sitting on my desktop (just got a monitor big enough to read document online – the trees will be happy!). Both of them are around the theme of  working out the direction of education in a digital ‘edgeless’ age. The reports were the ‘The future of learning institutions in a digital age’ and ‘The edgeless university’. In this post I’ll highlight some of the main features of these reports, leaving the question of how do we take these ideas forward (Wordle’s for all the reports mentioned are at the end of this post).

‘The future of learning institutions in a digital age’ 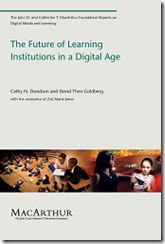 Authored by Cathy N. Davidson and David Theo Goldberg, this report funded by the John D. and Catherine T. MacArthur Foundation series on Digital Media and Learning, highlights how the affordances of the Internet, and in particular how the sharing and contribution to knowledge and ideas has created a mismatch between the general accepted model of teaching and how the current generation learns. Unlike the “Higher Education in a Web 2.0 World”, which in my opinion focuses too heavily on technology, this report looks at the shift from instructional to participatory learning and the resulting impact this has on the way we conceive ‘learning institutions’.
The authors of the report identify ten pedagogic principles which they believe are “foundational to rethinking the future of learning institutions”.  These are:

As noted by other commentators many of these ideas are not new. For example, you could argue that ‘networked learning’ stems from Illich in the 1970s:

we can provide the learner with new links to the world instead of continuing to funnel all educational programs through the teacher (Illich, 1970)

A common theme in these principals is the move towards educational models which use participation, learning communities and collective intelligence. These principles are also evident in the way that the report has been contributed to by the wider academic community. A draft of the report was published online in January 2007 which allowed any reader to comment on each paragraph of text or add additional remarks to existing comments (this was achieved using an open source theme for WordPress called CommentPress, developed by the Institute for the Future of the Book). The original draft and comments are here.I’ve read through a number of the comments posted on the draft, the majority of which appear to be very constructive, how successful the open review was isn’t clear (but the use of CommentPress as a tool to support student peer review looks very interesting).
In terms of making actionable recommendations the report falls short and the authors appear to be more interested in plugging their next book. The report is probably still worth a read, particularly if you are looking for material to convince your colleagues that there is a need to change. 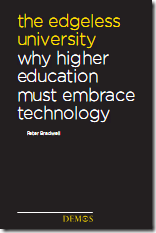 Authored by Peter Bradwell at Demos and funded by JISC, this report identifies “why higher education must embrace technology” and solutions for adapting to a world which requires institutions of the same function but of a different form, present in new places, in new ways. To this end the reports remit isn’t just teaching and learning, but extends to the other key functions of universities, research.
At the heart of this report is the same recognition  that “people [are] finding new ways to access and use ideas and knowledge, by new networks of learning and innovation” made possible by technologies like mobile internet and social networking which are becoming an increasing part of our everyday lives.
Last week I touched upon the idea of this blog being an ‘intelligent filter’. In the edgeless university the same responsibility is true, but on a larger scale: “the noise of information and knowledge needs filtering; students need guidance and expertise”.
The report identifies several challenges to managing an edgeless university. One of the challenges identified was the need to “reconcile informal learning with the formal system”. To achieve this requires strong leadership at institutional and governmental level:

Systems for accrediting informal learning will undoubtedly create pressures within institutions at all levels particularly regarding the cost, and public perception. For example, Glasgow Caledonian University, who have a number of experts leading the field of recognising prior and experiential learning, came under fire in 2003 with tabloid headlines reporting that students were given credit for having recovered from a drug addiction. I’m sure also a number of professional bodies who accredit degree programmes will also be resistant to any change. This is certainly an area where the Government needs to lead.
The report also highlights that becoming ‘edgeless’ isn’t about becoming faceless, students still highly valuing face-to-face contact and that staff need the opportunity and incentive to develop new ways of working.
Probably the biggest barrier the report identifies is supporting and recognising changing working practices at institutional and sector level. The new £20m open learning innovation fund announced with the release of the report is only a small drop in the ocean considering the storm that is brewing.
Overall the report concludes that:

In building the e-infrastructure for higher education we should not just build around the needs of institutions as they exist already. To pursue the possibilities of the ‘Edgeless University’, technology will have to be taken more seriously as a strategic asset. Technology is a driver for change. But we should harness it as a solution, a tool, for the way we want universities to support learning and research in the future.