A couple of weeks ago our RSC was involved in the Virtual Worlds 2008 event at the University of Stirling. As part of this I was tasked with facilitating a hands-on session being given by David Burden, MD at Daden Ltd (here’s Daden’s YouTube playlist). David was highlighting his work with University of Coventry and St. George’s Hospital, London on the JISC funded PREVIEW project.

The PREVIEW project have been exploring the use of virtual worlds, Second Life in particular, as an environment for problem-based learning (PBL) for care professionals and paramedic students. The care professionals are using open-ended PBL scenarios using a chatbot engine to create characters who can guide, act out eDramas and interact with students within Second Life. Paramedic students are using fixed-ended PBL scenarios which require them to conduct patient assessment and treatment on virtual patients in Second Life. The project is best summarised by the video below:

It was the paramedic scenarios which interested me the most, and in particular the Medbiquitous Virtual Patient (MVP) XML standard used to code them. This is an existing scripting language used to create virtual patients. The format is very similar to that found in ‘Fighting Fantasy’ books (i.e. a paragraph containing plot point followed by go to page x to do A, go to page y to do B, go to page z to do C). You can find examples of these on the University of Edinburgh’s Labyrinths site.

A virtual patient example is available here. The MVP standard uses a node model. For each page rendered there is an activity node which includes related assets: data availability, virtual patient data and media. The screenshot shows you how a page is rendered from the XML model. One of the limitations of the MVP model is that each node has a limited number of options, meaning there is a closed path, potentially inadvertently leading the students to the correct answer.

By using Second Life, PREVIEW have been able to take existing MVP scenarios and make them open ended. So instead of having a limited number of options, it is entirely up to the student as to how they proceed using only their existing medical training to guide them through the scenario.

The most important thing for me is that Second Life is only being used as a medium to interface the MVP scenario, consequently the scenarios can be exported to any other platform which supports MVP. The diagram below shows how this model works. 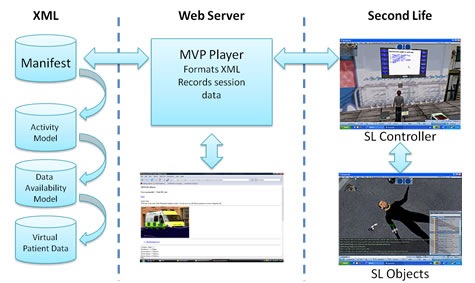 Diagram showing the flow of information between the XML, MVP Player and Second Life

To date the PREVIEW team at St. George’s have created 4 paramedic training scenarios. A short YouTube clip explaining these is here. I’ve made my own video so you can see what one of the scenarios looks likes from start to finish: 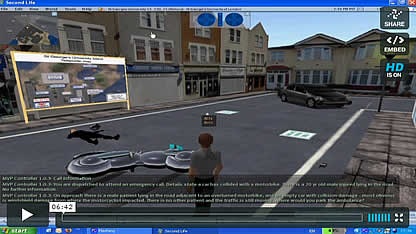 The crucial thing to remember is that Second Life is only being used to interface the MVP data. So when you click on a IV canella data is being read from the separate server hosting the MVP data. If you wanted to create a different paramedic scenario, the majority of information would be coded using the MVP standard.

It doesn’t have to stop at medical scenarios. The MVP standard is flexible enough to be adapted to other discipline areas which rely on problem-based learning. So theoretically this technology could be used for forensics, mechanical engineering, the list can go on.

To create problem-based learning scenarios for other disciplines would require scripting the scenario using the MVP standard, then creating the objects in Second Life you would like students to use to interface with the MVP. For example, if you wanted to create a scenario for forensic students you could create an SL object called ‘swab’. Then in the MVP you would create an activity node ‘swab’, which is linked to a data availability node with the associated actions/text (additional information could be coded using the virtual patient data or media assets).

And all this is going to be made open-source! Yes, PREVIEW will be making the code and the Second Life assets FREELY available in the next couple of months. Which I’m sure you’ll agree is fantastic!

If you would like to try the scenarios yourself you can by registering on the PREVIEW site. You can also take a peak by going to the St. Georges Island in Second Life.