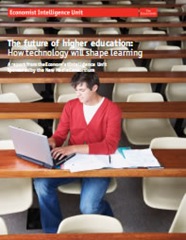 The Economist Intelligence Unit, with sponsorship from the New Media Consortium published The future of higher education: How technology will shape learning report yesterday (27th Oct). The key findings, from the global survey of 289 executives* from higher education and corporate setting, aren’t that surprising. In particular the associated press release highlights that "online learning is gaining a firm foothold in universities around the world" and "university respondents view technology as having a largely positive impact on their campuses", which I’m sure most of us already knew.

Digging deeper into the report there are one or two interesting findings not highlighted in the press release. For example almost 50% of respondents said that their institution already use mobile broadband and 66% utilise text messaging/notifications systems.  SMS usage was particularly surprising as over half the respondents were from the USA, which has historically had a low take-up of this technology.

When asked how respondents felt higher education would evolve in their country over the next five years, 69% felt that campus libraries would be enhanced by full-text searchable databases. The next most popular with 64% of respondents agreeing was that universities will frequently partner with corporations and other third parties to create new areas of study (this was a closed question with 8 other similar statements).

Overall however I feel the questions used in the survey were a little loaded and with the small sample size I doubt many institutions will be basing their strategic plans on the findings. I’ll leave it up to you to decide …