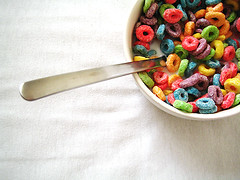 As I start to write this it is now 9.05am and I’ve been in work since 8.10am. After 10 minutes tidying paper away and trying to get my laptop to dock properly a couple of notifications came in from my Gmail account. Since starting at the RSC I’ve created a number of Google Alerts (email updates of user defined Google search results). My ‘”Higher Education” site:.uk’ alerts picked up the news that in Crewe they will be showing school pupils what university life is like, that Eastwood has been named as the new head of the University of Birmingham and ‘Blackburn College open day will be a class act‘. The alert also returned 5 blog entries from Policy Futures in Education (2), The Ed Techie (2) and Job Vacancies at Liverpool John Moores University (1).
The two posts that intrigued me the most were from Ed Techie, Technology as metaphor (or I’m on e-Literate) and Ads won’t fund learning (as we know it) (I’d never come across this blog by Martin Weller before but it immediately went into my RSS reader and recommend it to anyone else interested in educational technology, VLEs, web 2.0 etc.). The ‘technology as metaphor’ post was highlighting Martin’s guest contribution on e-Literate on SocialLearn: Bridging the Gap Between Web 2.0 and Higher Education. In this article Martin lays the foundation for exploring the relationship between technology and traditional educational frameworks. He argues that technology is facilitating ‘social change’, students adopting new tools for learning and socialising and that “the monolithic LMSs will be deserted, digital tumbleweed blowing down their forums. Students will abandon these in favour of their tools.”
The full article is well worth a read even only if you want an example of how the OUUK’s SocialLearn project is changing the way education is approached (if I get a chance I might post a summary of SocialLearn, so watch this space).
The Ads won’t fund learning post by Martin was in response to a post by Tony Hirst on The Cost of Learning (it appears the OU boys have been discussing business models for HE over a number of posts). While the discussion of education service models will be of interest to some, something else caught my eye. On the The Cost of Learning post Tony mentioned that he was “taking a break yesterday from blitzing a whole set of posts to the Visual Gadgets course un-unit (sic) blog experiment, …”. Tony has been experimenting with using blog for collecting material for an online course about visualising data in a graphical way. In an era of information overload this blog highlights a huge range of examples of how data can be visualised in different and succinct ways, well worth a browse.
So what have we learned from all this. Well apart from Eastwood (presumably not Clint) being named the new head of UoB hopefully this post demonstrates the power of ‘push’ technology. How a simple email alert, which took less than a minute to setup, started a chain of information which has highlighted some potentially useful sites and ongoing projects.
[Update — This post was picked up by my own Google Alert:

A morning’s learning: Google Alert -> EdTechie -> [HE2.0 …
By Martin Hawksey
My ‘”Higher Education” site:.uk’ alerts picked up the news that in Crewe they will be showing school pupils what university life is like, that Eastwood has been named as the new head of the University of Birmingham and ‘Blackburn …
MASHe – https://mashe.hawksey.info

Which guarantees I’ll be in the inbox of anyone else using the search term ‘”Higher Education” site:.uk’ ;-)]