Skip to content
I feel bad for not blogging recently so I’m going to cheat a bit. Today BBC News – Technology had a story about Outlook gets Facebook integration, which talks about the MS Outlook Social Connector. Originally I was just going to ‘tweet’ a link to the story with a related link to something I had written on this area in March, but then discovered I wrote it for our RSC NewsFeed blog. So I’m going to repost Your Inbox: Getting More Social here updating with a plugin I use with Gmail called rapportive.

Some of you maybe sick of the ‘social’ tag being used on virtual every new website start-up, and you maybe about to get sicker when you find out software developers want to ‘socialise’ your inbox.

First we have Microsoft’s Social Connector add-on for Outlook 2010. This allows users to view and use information from other Microsoft products and third party sites (so far Linkedin, Facebook and MySpace), as part of you inbox. The video below demonstrates the features of the product:

A couple of weeks ago we also highlighted Google Buzz = New Way to Organise Social Information on the Web, which again allows you to integrate a whole host of social networking sites. It is probably a stretch to say Buzz ‘integrates into your inbox’, sitting as it does in a separate tab within Google Mail. There is however some integration by using @reply to post directly to someone’s inbox.Click here for more of Google’s top Buzz tips.

Mozilla is the home of the Internet browser Firefox and other open source projects including their e-mail client Thunderbird and the more experimental communication tool, Raindrop. Just like Firefox Mozilla’s philosophy is to make it as easy as possible for third party developers to create additional functionality to their applications via add-ons. Social networking integration in Thunderbird is a little thin on the ground two example I’ve come across are WiseStamp – Email Signature and RapLeaf 4 Thunderbird add-on by DanielT. WiseStamp enables you to pull your existing social network information dynamically into your email signature, while the other integrates with the RapLeaf web service allowing you to see the senders registered social networks within the preview pane. Before you go rushing to sign up for Rapleaf their business is selling user behavioural patterns, which you can read more about in Mashable’s How Companies Are Using Your Social Media Data

Raindrop is perhaps more promising, but still in early development:

Raindrop is an experiment in designing for today’s messaging habits by collecting conversations from important messaging sources (email, twitter, …), understanding them, and organizing them for the user based on this understanding.

Rapportive are a UK based startup who have developed Firefox and Chrome plugins which replace the advert bar on Google Mail with information about the sender from a combination of sources (Gravatar, Plancast, Rapleaf and Twitter). Users also have an option to add their own notes about the sender (the CRM part). The main way I use this is to filter re-follow notification from Twitter, but  this is probably more a reflection on the fact that my Gmail is a personal account and I’m sure I could get a lot more from this service. 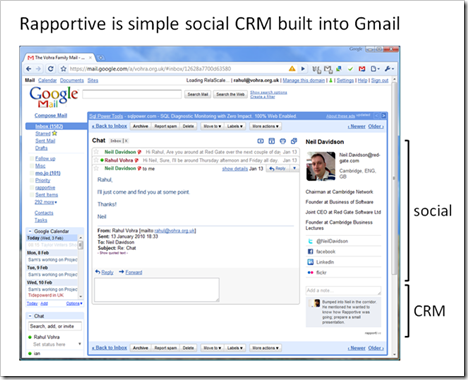 Your inbox is undoubtedly evolving, and reflects wider developments in the semantic web. As the world strives towards greater “data, information and knowledge exchange” communication tools like email will become enriched with information both purposely and surreptitiously pulled from the web. It should however be remembered that whilst many of us our inbox as the centre of our daily activities, can the same be said for students?